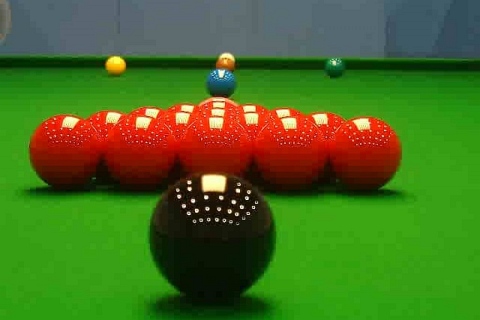 All the four Pakistani cueists, Mohammad Asif, Mohammad Sajjad, Mohammad Bilal and Sohail Shahzad, stormed into the knockout phase of the 32nd Asian Snooker Championship 2016 whose league matches concluded at Doha, Qatar, on Tuesday.
According to the information made available by the Pakistan Billiards & Snooker Association (PBSA), Sajjad and Bilal remained undefeated in the league matches.
A total of 58 cueists from as many as 20 countries entered the championship, divided into 12 groups for the preliminary rounds.
Sajjad, a former world number two, won his last couple of games in an emphatic fashion, toppling both opponents in straight frames to be the Group J champion.
He whacked Ahmed Saif of Qatar with the frame scores of 71-33, 71-38, 69-45, 91-0, compiling breaks of 66 and 73 in spectacular style. He meted out similar treatment to Ahmed Al Janahi of Bahrain, blasting him with the frame scores of 129-8, 80-6, 102-25, 59-58, chalking up breaks of 77, 52 and 102 in the one-sided affair.
In his earlier games, he had outclassed Shamil Ameen of Sri Lanka 4-1 and defeated Au Chi Chung of Hong Kong 4-2 on the opening day.
Pakistan’s national champion Bilal, making his debut in the continental event, remained the surprise packet as he won all his four games in the Group C.
He thrashed Meylis Atayev of Turkmenistan in straight frames with the scores of 74-16, 72-8, 65-23, 75-8 in his final league outing.
Earlier, he had prevailed over Baek Minhu of South Korea, Abdul Rehman Abdul Mohsin of Qatar and Mohammad Shehab of the UAE.
Second seed Asif, having registered victories in his first three games, was brought down to earth by Omar Al Ajlani of Saudi Arabia who trounced him in straight frames with the scores of 77-36, 123-1, 74-52, 86-6.
The 2012 world amateur champion, however, had secured his place in the knockout phase from the Group B by defeating Khalid Alastal of Palestine, Abdul Lateef Al Fawal of Qatar and Karam Fatima of Syria.
Sohail entered the knockout stage by winning two of his four matches. He edged out Lim Kok Leong of Malaysia 4-3 with the scores of 30-64, 87-24, 89-4, 87-1, 32-59, 22-87, 57-6. He had, earlier, whipped Adel Ibrahim of Iraq in straight frames.
He was defeated 2-4 by Manan Chandra of India in his maiden outing in the Group D and by Ahmed Abdullah Asiri of Saudi Arabia, who won the last game 4-1 with the frame scores of 65-36, 51-31, 44-65, 64-31, 69-25.