Top two ranked cueists — Mohammad Asif and Shahid Aftab — have qualified for the premier Asian Snooker Championship which has been postponed due to fast-spreading coronavirus pandemic. 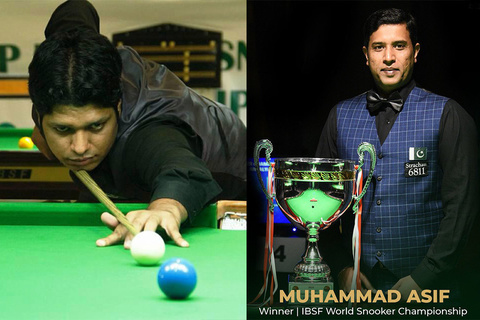 Top two ranked cueists — Mohammad Asif and Shahid Aftab — have qualified for the premier Asian Snooker Championship which has been postponed due.

The Asian Confederation of Billiards Sports (ACBS) has postponed the 36th Asian Snooker Championship, eighth Asian Team and ninth 6-Reds competitions that were scheduled to take plate at Doha from March 27 to April seven due to fast-spreading coronavirus pandemic.

“Yes the annual events have been postponed by the Doha-based regional body for safety of cueists and officials,” the Pakistan Billiards and Snooker Federation (PBSF) President Munawwar Hussain Shaikh announced.

It is pertinent to mention that the incumbent world champion Asif coasted to 8-7 victory over Shahid in the best of fifteen title clash to clinch his fourth national title recently.


The PBSF official said lineup for the Asian Team and 6-Reds will be named later. Fielding two outfits in the Team Event will depend on availibility of funds, he added. He informed that the new dates of the events will be announced by the ACBS after the situation comes under control globally.


Meanwhile, the ongoing epidemic scenario is likely to disrupt the domestic schedule of the game also.