Hamza Akbar, acclaimed as Pakistan’s most skilled all-round cueist, crashed in the second of qualifying rounds of the Betfred World Championship at the Ponds Forge International Sports Centre in Sheffield. 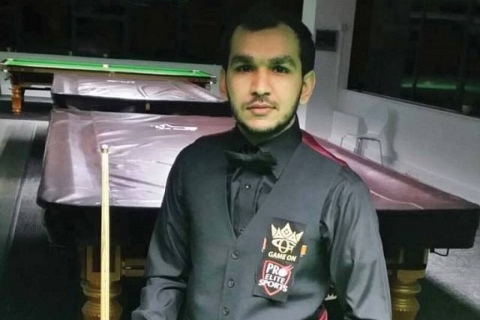 Hamza Akbar, acclaimed as Pakistan’s most skilled all-round cueist, crashed in the second of qualifying rounds of the Betfred World Championship at the Ponds Forge International Sports Centre in Sheffield.

Hamza, who had begun his campaign in the prestigious event on a winning note by beating Jamie Jones of Wales 10-5 in the opening round of qualifiers, was unable to repeat the performance.

Burns got off to a businesslike start, winning the first couple of frames leisurely. Hamza gave him a wakeup call by snatching the third frame with a silky break of 50 but the English cueist pocketed the next three frames in a row to move 5-1 up. He fired breaks of 54 and 51 in fourth and fifth frames, respectively.

Hamza, who hails from Pakistan’s industrial town of Faisalabad, made it 2-5 by taking the seventh frame. But his rival compiled sizzling breaks of 84, 61 and 50 to move into 8-2 lead in the best of 19-frame encounter.

Hamza fought back to win the 11th frame but another classy break of 51 in the next frame allowed Burns to regain his six-frame lead. There was a close contest in the 13th frame but Hamza was unable to press home the advantage and it was all over for him with Burns wrapping up the issue 10-3.

Hamza, who had emerged triumphant in the 31st Asian Amateur Snooker Championship in Kuala Lumpur, Malaysia, last year, had appeared confident of making bigger strides in the prestigious professional circuit tournament but it was not to be.

The Ponds Forge International Sports Centre in Sheffield, playing host to the qualifying rounds of Betfred World Snooker Championship for the third consecutive year, will be the venue of the qualifiers due to conclude on Wednesday (tomorrow). The action will then move on to the nearby Crucible Theatre, where the 16 qualifiers will lock horns with the 16 seeded cueists.