Out of a total of 48, thirty-one probables reported at the training camp set up at the National Hockey Stadium, Lahore for the 29th Sultan Azlan Shah Cup hockey tournament being held in Ipoh, Malaysia in April. 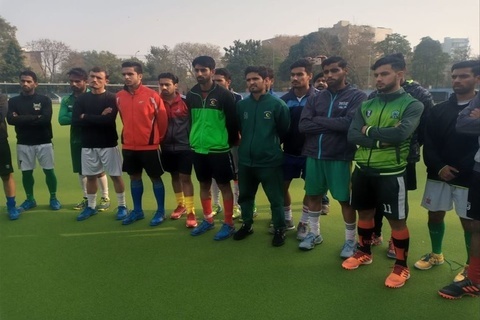 Thirty-one probables out of a total of 48 reported at the training camp set up at the National Hockey Stadium, Lahore for the 29th Sultan Azlan Shah Cup hockey tournament being held in Ipoh, Malaysia in April.

Out of the 17 who have not reported, eight are participating in foreign leagues.

“Twelve probables could not report at the camp as they are currently playing league hockey in Malaysia and Egypt while four other probables are taking care of their ailing parents. Two players are unfit,” head coach Khawaja Junaid . “All the [remaining] probables will join the camp next week.”
The first phase of the camp would continue till Feb 20 while the second phase would start on March 1.
This year’s Sultan Azlan Shah Cup, whose inaugural edition was held back in 1983, will be staged from April 11 to 18. The event will feature teams from Australia, Canada, Japan, South Korea, Pakistan and hosts Malaysia. Pakistan, the former three-time winners, last appeared in the invitational event in the year 2016.
“As the National Hockey Stadium is part of the Nishtar Sports Complex where the Gaddafi Stadium, a cricket venue for the Pakistan Super League, is also located, due to security reasons the venue of our training camp may change,” Junaid said.
Focus at the camp would be on improving physical and mental strength of the players and on honing their skills, the head coach added.