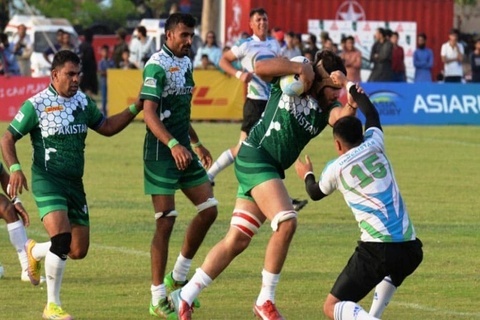 The Asia Rugby has granted the hosting rights of Asia Rugby Men’s 15-side Championship Div-II to Pakistan Rugby Union.

Four teams will participate in the event, which will take place from Feb 26 to 29.


Teams from Chinese Taipei, China, Thailand and Pakistan will be seen in action during the event. The teams will arrive the country on Feb 24 while the first match will be played on Feb 26 between Thailand and China and the second on the same day between hosts Pakistan and Chinese Taipei.

The winners of first two games will take on each other on Feb 29 in the first match while the losers will play on the same day in the second match.

Pakistan Rugby Union (PRU) President Arif Saeed said: “To conduct this event in a befitting manner, we have started our preparations. We have an Australian coach Hadley Jackson, who has reached Lahore and doing training camp every Friday, Saturday and Sunday. In Febrarury, the camp will be shifted to Islamabad while the last phase of the camp will be held at Lahore again.

PRU President Arif Saeed further added: “We are hopeful that if Pakistan team can beat the bigger teams and qualify for Div-I, it can also win its matches during this event and we have bright chances of winning the event. Last year, we qualified for Div-II here in Lahore and we are very thankful to Asia Rugby for granting us such a big event.”