Trials for the Khyber Pakhtunkhwa U21 Games-2020 get underway

The trials for the Khyber Pakhtunkhwa U21 Games-2020 got underway in 104 Tehsils of 32 districts including the recently merged tribal districts. 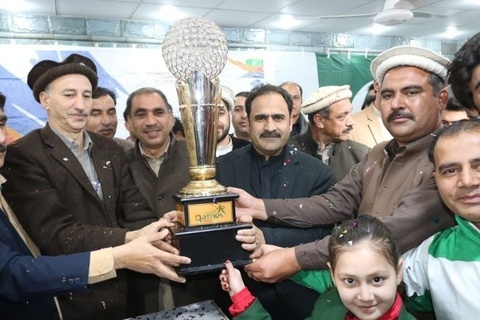 The trials for the Khyber Pakhtunkhwa U21 Games-2020 got underway in 104 Tehsils of 32 districts including the recently merged tribal districts which are taking part in the game. Players born after 1.1.1999 have been advised to get registered for 27 female and 32 male Games at Union Councils, Tehsils, Districts and Regional Levels.

This was started by Director Operation Syed Saqlain Shah during his visit to various Tehsils of District Nowshera, Peshawar and Charsadda Districts. He said trials in all across KP for Inter-Tehsil Games got underway in all 104 Tehsils including 25 Tehsils of the seven merged tribal districts.

He said players are advised to get registered for the trials for Inter-Tehsil Games to be held from Feb 5-18, 2020 in the first phase while the second and third phases the Inter-Districts and Inter-Regional levels Games would be starting from Feb 24-27, 2020.

He said that the trials in all Tehsils would continue till January 26. He said overall 22,907 female and male players would be part of the KP U21 Games-2020. After completion of the first phase at Tehsil level, the players would compete in Inter-District and Inter-Regional Games.

He said during the Tehsil Games, trials for the Inter-Districts would also be completed well before the commencement of the Inter-District Games from Feb 24-27. “We held meetings with all affiliated associations in order to work together through a plan scheduled at Inter-Districts level before ensuring opportunities to the youth to come from UCs to Tehsil, from Tehsil to District and District to Regional levels,” Saqlain Shah said.

It was also decided to hold the Inter-Regional Games in the same dates so that a bigger gathering would be developed of the players in Peshawar, Mr. Shah added. He said each committee is headed by Deputy Commissioner of the respective Districts. The committee will have members from the Education Department at School, College and University level, KP Olympic Association and all its affiliated sports bodies.

Speaking during the inauguration ceremony DC Nowshera Shahid Ali Khan lauded the Directorate General Sports KP for making a comprehensive plan in involving such a huge number of players from UCs, Tehsil, District and Regional level.

He said in the last three editions of the KP U23 Games, more talented players got opportunities to come up at national and international levels. He also appreciated the role of Senior Minister for Sports Muhammad Atif Khan, Secretary Sports Flt. Lt. Khushal Khan and DG Sports KP Asfandyar Khattak, RSOs KP, DSOs and members various associations affiliated with KP Olympic Association for their untiring efforts in ensuring healthy activtities to the youth.

He also announced Rs. 30,000 for winners of the Inter-Union Council team and Rs. 10,000 would be given to the runners-up. Soon after completion the trials proper kits including track-suites, shoes and playing uniform would be given to the selected players to be part of Inter-Tehsil Games.