Total 12 teams will be competing in Essa Lab Basketball Tournament 2019 that will begin its proceedings from today at Abdul Nasir Courts in Arambagh, Karachi. 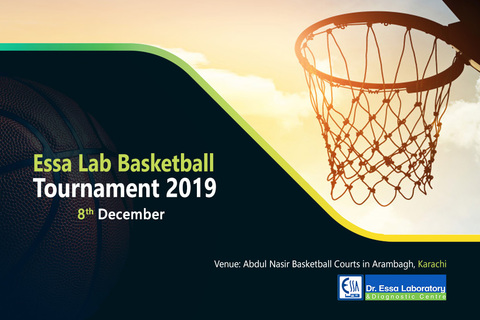 4th Essa Laboratories Basketball Tournament      Abdul Nasir Courts in Arambagh
According to information provided by Tournament Director and KBBA President, Ghulam Muhammad as many as 12 teams are taking in the 4th Essa Lab Basketball Tournament that have been divided into four groups.
The opening match will be played today between Michael Turner IX and Dr Essa Abdullah IX Teams at Abdul Nasir Courts in Arambagh, Karachi. Players from their respective teams will be seen competing with all their skills against each their in the upcoming competition to earn the ultimate title of the tournament.
All matches will be played on league basis.
Essa Lab Chief Executive Dr Farhan Essa Abdullah will be the honorable chief guest at the opening ceremony who will declare the event open while Essa Lab Director Sports, Maryam Farhan Essa will be the guest of honor.
Tariq Hussain is the organizing secretary of the event while Muhammad Arshad is the media coordinator.