Top-seed Muhammad Asif triumphed over Muhammad Sajjad 7-4 in the final of the 3rd Jubilee Insurance Ranking Snooker Championship 2019 here at the Karachi Gymkhana. 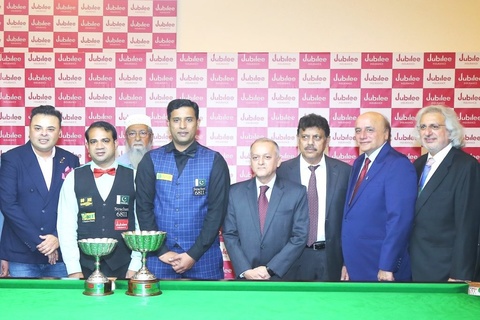 “Sajad missed a red ball at the center pocket in the eighth frame that proved to be a turning point and changed the complexion of the match,” a jubilant Asif said after the victory.

Paying compliments to his opponent he said Sajjad has made a comeback on the circuit after a bad patch and added the match could have gone either way had the latter availed his chances.

“We’ve met three times in the final and luckily I’d won on all the occasions the last time being in the seventh NBP Cup in 2015, he added.

It is pertinent to mention that both the finalists belonged to group A and Asif had defeated Sajjad 4-2 in the league match. Sajjad was satisfied with his performance in the event and the final and attributed it to hard work and using a new branded cue which he had purchase for Rs112,000.
While Asif has retained his No 1 ranking by virtue of winning back-to-back ranking events the NBP Cup and the third ranking Bilal has leaped two places to attain second spot in place of Zulfiqar who has slipped to 10th position.

Asjad has also retained his third position while Sajjad has occupied fourth place in the latest ranking that will be officially released later.
The highest break award of Rs5,000 was earned by former world junior champion Mohammad Naseem Akhtar for his feat of 134.