Pakistan’s star javelin thrower Arshad Nadeem will be looking to give a big news to Pakistan when he features in the World Athletics Championships qualification round at Khalifa International Stadium in Doha on Saturday (today). 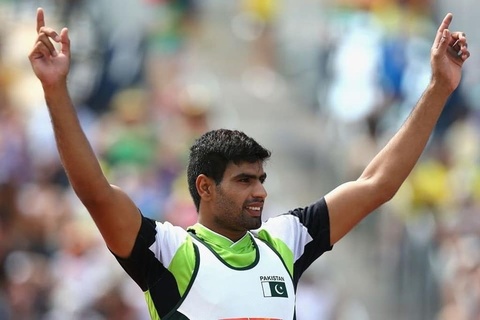 Pakistan’s star javelin thrower Arshad Nadeem will be looking to give a big news to Pakistan when he features in the World Athletics Championships qualification round at Khalifa International Stadium in Doha on Saturday (today).
The 2018 Asian Games bronze medallist is aiming to qualify for the 2020 Tokyo Olympics, a target which is within reach. However, one factor could hamper Arshad’s progress as he has not passed through a quality training because of financial issues. During the last one year he mostly stayed idle at home. After lifting bronze in the 2018 Asian Games in Indonesia, Arshad only featured in the Asian Championships in Doha during the last one year.
Pakistan Sports Board (PSB), eventually, held camp for a pack of athletes, including Arshad in Lahore, for a couple of months but that work-out for a highly talented athlete was not enough. He needs to achieve 85m throw, a target if achieved, can put him in the Olympics.
Arshad, in the qualification round, has been kept in Group B, carrying 16 athletes. The Group A also features the same number of javelin throwers. His first target will be to qualify for the finals which will be held on Sunday (tomorrow).
A senior official of the athletics governing body of Pakistan (AFP) is confident about Arshad’s success.

“I hope he will put in his best,” AFP secretary Mohammad Zafar said.

AFP chief and former international athlete Major General (retd) Mohammad Akram Sahi is accompanying Arshad. Sahi a few days ago contested for the council membership of the world athletics governing body (IAAF) but missed the seat just by three votes.
After securing bronze in Asiad last year, Arshad recorded 78.55m to finish sixth in the Asian Championships in Doha in April this year. Arshad’s personal best is 80.75, which he had achieved in the 2018 Asian Games. But he has recorded 82m plus in training. And it remains to be seen how he exploits his potential in Doha event when he will be competing with the world’s best crop.
Arshad said that he will be targeting the Olympics.

“My only aim is to make it to the Olympics,” Arshad said.

“Pray for me. I am in fine element and want to make an extra effort,” the athlete said.