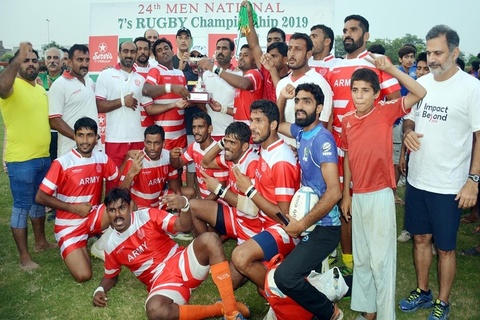 A pulsating final was seen between the debutantes Pakistan Air Force "Sherdils" as they played like "Shers" with a lot of "Dil" losing narrowly to the mighty "Reds" where the Pak Army defeated Pakistan Air Force 5-0 to win the 24th National Rugby-Sevens Championships final played at the Pakistan Rugby Academy, Lahore.
In the final, the solitary try made by Anjum was the decisive, which gave Army five valuable points. Army kept the lead till the final whistle.
Earlier, Army defeated Railways by a big margin of 52-0 in the first semi-final, while Air Force trounced WAPDA by a 21-5 margin to enter the final.
WAPDA grabbed the third place after defeating Railways 50-0.
According to the final results, eight teams, which have also qualified for the next month’s National Games being held in Peshawar, are Army, Air Force, WAPDA, Railways and all four provincial teams.