Indoor 6 aside Hockey Tournament kicks off with tremendous display 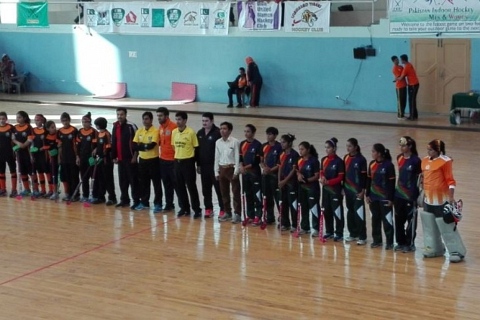 1st invitational Hockey 20-20 Tournament      Sports Complex, Boxing Hall
The tournament is a  6 aside hockey tournament which will be played for a period of 3 days. 7 women and 8 men hockey teams are participating in the tournament.

Indoor hockey is a bit different from the normal field hockey. It is fast and require more stamina, agility, speed and technique.

Since the downfall of hockey in Pakistan, such tournament is organized to uplift the standards of hockey in the country.

Indoor Hockey is a recognized by FIH and various world cups of indoor hockey has been organised as well. Sadly, Pakistan didn't participated in any of the world cup as Pakistan is yet to have its national indoor hockey team.

The organizers has put up a lot of efforts to organize the tournament for the revival of the sport in Pakistan and various such tournaments needs to be encouraged in future.

On the first day of the tournament women matches were played. Diva Hockey Club and Young Fighter hockey club dominated the display and defeated there opponents with quite a margin.

Young Fighter defeated Rising star by 6-0. Sana Arshad Scored a double for her team and helped them to secured a victory in the pool match,

In another match Diva defeated Islamabad Girls by whooping 6-0 score line. Mayira Sabir scored a brilliant hat-trick to help her side clinch the victory.

In another match Ustad Asla Roda Club defeated hammered United club 5-1. Nazia Rehmat scored a hat-trickfor her side while a consolation goal was scored by United club later on a penality stroke.

Men matches will be played today in the Boxing Gymnasium.