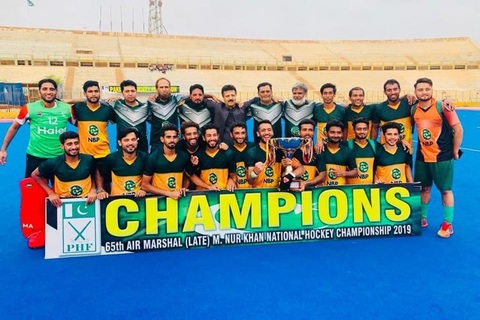 65th Air Marshal Nur Khan National Hockey Championship 2019      Abdul Sattar Edhi Stadium, Karachi,
Defending champions National Bank of Pakistan (NBP) carved out a nailbiting 5-4 victory over stubborn Sui Southern Gas Company (SSGC) on penalty shootouts after being tied one-all in regulation time to win the title for an overall fifth time as curtain fell on the 65th retired Air Marshal Nur Khan National Hockey Championship at the Abdul Sattar Edhi Hockey Stadium, Karachi.
Mubashir Ali efficiently converted penalty corner in the 21st minute for the SSGC while the NBP drew level through Arsalan Qadir, also off PC in the 50th minute. Later the bankers availed all five penalty strokes as against four capitalised by the SSGC.
Arsalan Qadir, Dilber Hussain, Faizan Ali, Abu Bakar and Junaid Manzoor scored for NBP on strokes while Ali Shan, Rana Sohail, Muneeb-ur-Rehman and Ahmed Nadeem scored for SSGC. Rana Sohail missed his opportunity.
Winning captain Ammad Butt accompanied by other teammates received the glittering trophy amidst applause from the Sindh Chief Minister Syed Murad Ali Shah, who graced the final.
Also present at the presentation besides the PHF hierarchy were retired Vice Admiral Arifullah Hussaini and the Commissioner Karachi Iftikhar Ali Shallwani. Earlier, before the final the two teams were introduced to the Pakistan Olympic Association (POA) President retired Lt Gen Syed Arif Hasan.
Speaking on the occasion the chief minister expressed his dismay over the decline of national game for the last couple of years. He said Sindh government had supported the PHF in the past besides releasing another Rs25m recently for the revival of the game.
Paying rich tributes to Nur Khan, he said his contribution was unparalleled in the field of sports and the PHF has acknowledged it.
A one-minute silence was also observed for the late retired Brig Abdul Hamid ‘Hamidi’ and K. M. Aslam on the occasion. Contrary to their below the mark performance in the entire event, the bankers were lucky to maintain ascendancy. They also finished runners-up in pool A.

Both NBP and SSGC got one chance apiece in the first quarter but couldn’t get breakthrough. The bankers earned their first PC one minute after resumption of second quarter but indirect try missed the target.
SSGC made a counter attack and forced their first PC in the 21st minute which went unfruitful and following a foul they got the second which was converted by Mubashir. The SSGC led 1-0 at half time.
The bankers made most of their moves from the right flank and hardly utilised the left side in the entire match. In 32nd minute they made a move from the right but the forwards failed to connect it.
Making inroads in search of an equaliser, the bankers got another PC in the 42nd minute but it was blocked by SSGC keeper Amjad Ali.
The bankers mounted pressure as the fourth and last quarter commenced, forcing back-to-back PC’s and one of them helped them restore parity through Arsalan Qadir.
Earlier in the playoff for the third position, WAPDA Colours defeated WAPDA Whites 7-6 in tall scoring all-WAPDA match to grab bronze.