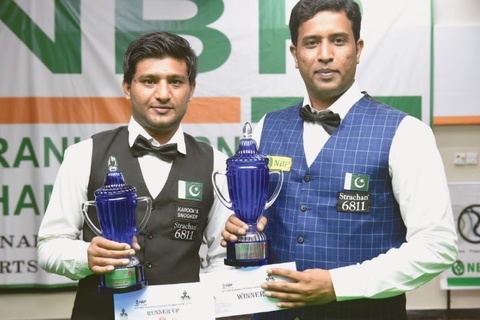 11th NBP Ranking Snooker Championship 2019      NBP Sports Complex in Clifton Karachi
As the best of 15-frame epic final progressed until seven-all, it was the turn of Mohammad Asif to return 8-7 triumphant over Mubashir Raza while regaining the title in the 11th National Bank of Pakistan (NBP) ranking snooker championship at the bank’s sports complex, Karachi.
Three century breaks two by Asif of 126 and 132 and 103 by Mubashir highlighted the final. Mubashir made a brisk start as he went 4-1 up cracking 62 and 55 breaks in the first, 60 in the second, 103 in the fourth, 59 and 53 in the fifth.
Consequently, the first five frames were completed inside 90 minutes and Mubashir, making his maiden appearance in the final of any national ranking tournament, was in full flow without showing any sign of nerves.
The 25-year-old cueist from Lahore opened his account by firing breaks of 62 and 55 in the opening frame and he doubled his lead with the help of 60 in the second frame.
Taking advantage of his experience former national champion roared back taking the next three frames in-a-row to draw level at four-all. Mubashir again went 5-4 up winning the ninth before conceding the 10th as both tied five-all.
Captivating benefit of Mubashir’s lapse of missing a black ball, Asif made a clearance of 126 in the 11th frame and piled up another break of 132 in the next frame to take a 7-5 lead. Again it was never-say-die Mubashir who took the 13th and 14th frames to brought his opponent on even terms again (7-7).
The decisive frame saw Asif cracking breaks of 76 and 64 to turned the tide in his favour.
The scores were: 0-117, 8-127, 60-31, 6-131, 0-115, 92-32, 62-16, 95-0, 51-74, 74-0, 126-7, 132-0, 31-72, 45-54, 140-0
By doing so the former world champion achieved three things. Firstly, he surged on top of the ladder in the national ranking, secondly, booked a ticket for the IBSF World Championship and finally avenged his 2-4 defeat that he had suffered against Mubashir in the group match.

“The final was evenly poised and it was the last frame that made the difference,” the 37-year-old former celebrity said after the victory.

Giving full marks to young Mubashir he said it’s a good omen that the event has unearthed couple of cueists have potential to carry the game forward. It’s so near yet so far for young Mubashir, who played first ranking final of his career.
“I’m happy on my performance and playing the final against such a senior player was an honour,” the Lahore-based player said, who has represented the country in the IBSF world championship at Doha in 2017 and again in an invitational event at the same venue last year.
Mubashir said it’s a good platform and will work hard to qualify for the professional event in coming days. He, however, regretted that snooker players didn’t get the same protocol as other sportsmen.
Asif pocketed purse of Rs100,000 and winning trophy while Mubashir earned Rs40,000 and the runner-up trophy from SEVP of the NBP Tariq Jamali.