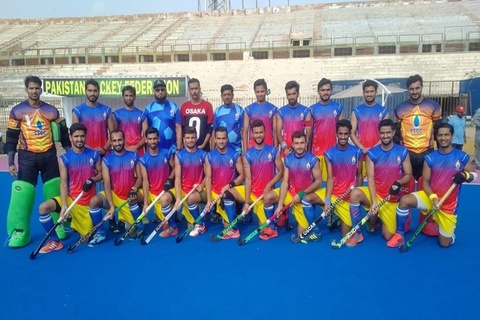 65th Air Marshal Nur Khan National Hockey Championship 2019      Abdul Sattar Edhi Stadium, Karachi,
Defending champions National Bank of Pakistan (NBP) and Sui Southern Gas Company (SSGC) romped to the final as both WAPDA outfits crashed out semifinal of the Air Marshal Nur Khan (late) National Hockey Championship here at the Abdul Sattar Edhi Stadium, Karachi.
NBP, who are aspiring to win the crown for a fifth time overall, carved out 3-1 victory over WAPDA Whites in the first semi-final while SSGC shocked last runners-up WAPDA 2-1 in the other encounter.
This is the first time in the history of the tournament that two WAPDA teams have featured in the semi-finals. The final between NBP and SSGC will be played on Monday at 4:00 pm. This will be preceded by third position playoff between WAPDA and WAPDA Whites at 1:30pm.
NBP are a strong side on paper with a number of Pakistan team players in its fold while WAPDA’s second string Whites comprised of youngsters who made their maiden appearance in the last four.
Both teams played cautiously in the first quarter as WAPDA Whites kept their more illustrious opponents at bay. Adeel Khan missed a sitter for WAPDA Whites while Nohaiz Zahid’s try was cleared by custodian Ameen Yousuf besides Faisal Qadir missed an opportunity to give his team a lead.
The bankers, however, managed to draw first blood through Atiq Arshad who scored off a pass from Shan Irshad in the 18th minute. Two minutes earlier they failed to convert from their first penalty corner.
After enjoying a solitary goal lead at half time, the bankers settled down and added a goal each in the third and fourth quarters courtesy brace by Bilal Qadir in the 42nd and 48th minutes.
Despite lack of experience, WAPDA Whites retaliated and forced a PC in the 50th minute but it went a begging. Finally, Shajeel Ahmed reduced the deficit two minutes from end. The bankers got three more PC’s but they were wasted.
A brace by seasoned striker Mubashir Ali steered SSGC into their maiden final of the country’s premier hockey championship. WAPDA opened the account in the fifth minute through Aleem Bilal off penalty stroke.
Mubashir restored parity by efficiently converting team’s second PC in 15th minute. Both teams were tied one-all at half time. Mubashir consolidated team’s position and sealed the fate by converting the fifth PC in the 38th minute.
With many famous names in their line-ups, Monday’s final between NBP and SSGC is expected to produce exciting game as both teams will measure each other’s strength. While the bankers will be under pressure to defend the title, SSGC will go all out to clinch the elusive crown. The title has eluded them on nine occasions in the past. The SSGC will have advantage of experienced PC striker Mubashir who can make the difference.