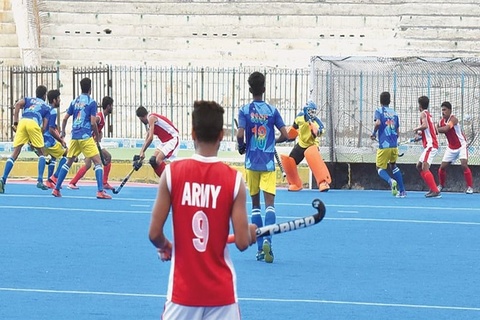 65th Air Marshal Nur Khan National Hockey Championship 2019      Abdul Sattar Edhi Stadium, Karachi,
Defending champions National Bank of Pakistan (NBP) and Sui Southern Gas Company (SSGC) along with two WAPDA teams completed the last-four lineup while former champions PIA bowed out of the 65th retired Air Marshal Nur Khan National Hockey Championship at the Abdul Sattar Edhi Hockey Stadium, Karachi.
NBP, who finished runners-up in Pool ‘A’ behind Army, scored a solitary goal victory over Navy in their quarter-final.
Meanwhile, Abu Bakr’s second-minute goal helped NBP defeat Navy 1-0. Navy made several attempts but their forwards remained unable to penetrate strong NBP defence. Despite getting six penalty corners, Navy failed to capitalise.
The match was also marred by injuries to at least two NBP players Kashif Javed and Arsalan Qadir. According to the Hilal-e-Ahmer paramedic official Abdul Hameed, the former was rushed to a nearby hospital where four stitches were inserted on his head. Arsalan suffered a bruise below one of his eyes.
After a nail-biting battle, WAPDA (Whites) overcame Army 5-4 in the quarter-final.
Army enjoyed edge over their opponents for most part of the match and were 4-3 up in third quarter. However, back-to-back goals by Adnan in the last quarter turned the tide in their favour.
Rana Waheed, Shahzab and Shazer Rehman netted one goal each for WAPDA Whites.
Abdul Jabbar struck two goals while Mohammad Rizwan and Mohammad Afzal netted once for Army.
In the third quarter-final, WAPDA stunned ex-champions PIA 3-2, courtesy of a last-minute goal by Haleem Usman that enabled his team to inch closer towards laying their hands on the crown.
The match was heading for a draw when Haleem struck his second goal seconds before the final hooter.
At the outset, Samiullah drew first blood for WAPDA in the second minute. Abid Bhatti then scored a brace for PIA.
In the last match SSGC sent Army Whites packing 5-0 to stay in contention for the title.
Mubashir Ali excelled with a hat-trick by converting first three penalty corners in the opening quarter while Ghazanfar and Abbas Haider added one apiece to the tally.
Meanwhile, the organisers have revised the dates for the semi-finals and final. According to the revised programme, the semi-finals will be now played on Sunday following a two-day rest.
The final will be played on Monday. WAPDA Whites take on NBP in the first semi-final today(2 Aug) at 2:00pm while SSGC face WAPDA in the second at 4:00pm.