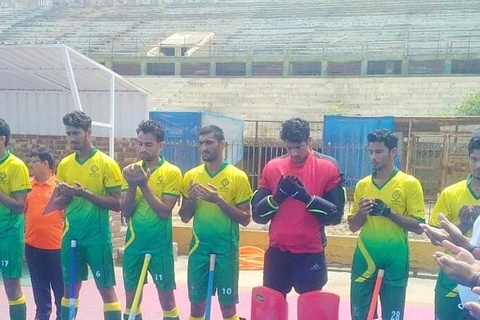 65th Air Marshal Nur Khan National Hockey Championship 2019      Abdul Sattar Edhi Stadium, Karachi,
Eight departmental teams including two outfits each of Army and WAPDA, completed the quarter-final line-up in the 65th retired Air Marshal Nur Khan National Hockey Championship at the Abdul Sattar Edhi Hockey Stadium, Karachi.
The teams which progressed into last eight include Army, National Bank of Pakistan (pool A), WAPDA, Army Whites (pool B), SSGC, PIA (pool C), Pakistan Navy, WAPDA Whites (pool D).
In the first match of the day, PQA defeated WAPDA Whites as Harris sent the ball rolling into the net in the 24th minute after some intense defensive field play. Ali Raza doubled their lead through a field goal.
Adeel Khan scored in the 42nd minute for WAPDA Whites to make it 2-1 but PQA kept their attacking game and Bilal extended their lead to 3-1, dragging the ball in the net in the 47th minute. Haris scored his second goal in the last minutes.
PQA, however, failed to make the cut for the next round. The match between MPCL and Army Whites was a lively contest as only two goals were conceded. Army’s Muzammil broke the deadlock in the 21st minute via a field goal. There was no goal in the third quarter as both teams showed good defensive skills.
In the 52nd minute, Ahmed doubled Army’s lead. MPCL also failed to qualify for the next round. The quarter-finals will be played on Thursday (today). Army will take on WAPDA Whites in the first quarter-final. Navy will play NBP in the second, WAPDA will take field against PIA in the third, and SSGC will have to fight against Army Whites.
The pool matches that concluded on Wednesday produced lacklusture performance particularly from Punjab and Sindh who failed to make an impact unlike yesteryear. The graph of two most seasoned outfits NBP and PIA has also fallen drastically which was visible from their matches.
All the four quarter-finals will be played on Thursday(today). According to draws, pool A champions Army takes on pool D runners-up WAPDA Whites at 11:00am. In the next match, Navy, who topped pool D faces defending champion National Bank who had to be content with second slot in pool A at 11:00am.
WAPDA, the pool B winners are pitted against pool C runners-up PIA in the third quarter-final at 2:30pm. The last match will see SSGC up against Army Whites at 4:30pm.