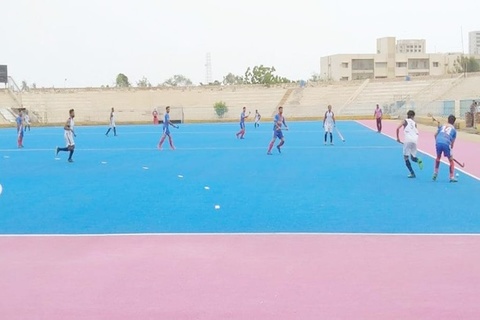 65th Air Marshal Nur Khan National Hockey Championship 2019      Abdul Sattar Edhi Stadium, Karachi,
Dilbar Hussian's 10 goals steered NBP to route out Gilgit 27-0 in the 65th Muhammad Noor Khan National Hockey Championship 2019 match played at Abdul Sattar Edhi National Hockey Stadium, Karachi. Besides NBP, in the other matches of the day, PIA hammered Islamabad 8-0, Army Whites thrashed Fata 16-0, Police edged out KP 4-3 and in the last match of the day, Navy beat Port Qasim 3-1.
In the first match, NBP simply toyed with Gilgit team and scored goals at will. It was raining of goals from everywhere. Dilbar, who had scored for Pakistan national team on number of occasions, was in sublime form with the stick and scored 10 goals while Atiq, Bilal and Juniad hit hat tricks, Abu Bakar and Ali Hassan scored two goals apiece while Kashif, Nohaiz, Hassan, Faizan and Ahmad Butt were also on the score sheet.
In the second match, PIA went 8 goals past Islamabad. Roman Khan and Shafqat Rasool scored two goals each while Hamid, Zubair, Waqas and Abu Zar scored a goal each.
In the third match, Army Whites hammered Fata 16-0, Waseem Akram, Farhan and Anwar scored three goals. M Tauqeer and M Ahmed scored two goals each while Aammad Ali, Faizan, Ahmed and Muzammil scored a goal each for the winners.

It was arguably the best match of the tournament played between Police and KP. Police edge out KP 4-3. Shahbaz scored a brace for the winners while Ibrar and Noman also scored a goal for KP. Ismail scored two and Yasir scored one goal.
In the 5th and last match of the day, Navy outlasted  3-1. Asad Azhar, Akbar Ali and m Saqib scored a goal each for the sailors, while Abdul Rehman scored the consolation goal for Port Qasim.
Day-6 Results:

President Pakistan Hockey Federation Tariq Mir announced the basic aim of holding the championship is to provide fresh talent to Pakistan hockey. It is the vision of President Brig (R) Khalid Khokhar that youngsters are the future of Pakistan hockey. We had already witness some of the best talent and Khubaib Ahmed of Punjab is one such massive talent, who could become one of the greats of Pakistan hockey in the years to come. I have prepared a report and will present to the PHF President as the championship concludes.