Arsalan's hat-trick steers Army to continue their winning streak in the in the 65th Muhammad Noor Khan National Hockey Championship-2019 as they thrashed KP 7-2 in a match played at Abdul Sattar Edhi National Hockey Stadium, Karachi. 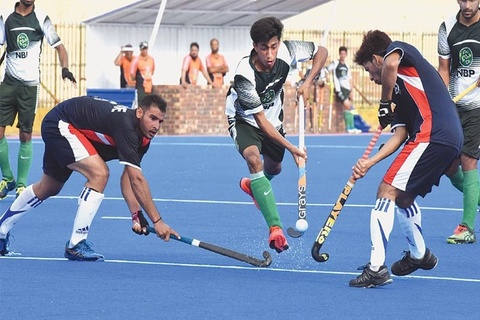 65th Air Marshal Nur Khan National Hockey Championship 2019      Abdul Sattar Edhi Stadium, Karachi,
Arsalan's hat-trick steers Army to continue their winning streak in the in the 65th Muhammad Noor Khan National Hockey Championship-2019 as they thrashed KP 7-2 in a match played at Abdul Sattar Edhi National Hockey Stadium, Karachi.
In other matches, WAPDA, who had the services of some of the top international stars, managed to beat young Punjab outfit 5-0, SSGC hammered PAF 7-1, Railways hold on Port Qasim 2-2 and Navy played 2-2 draw against WAPDA Whites.
In the first match, it was all about Army’s Arsalan, who scored a superb hat-trick while Ali Haider, Saeed, Muhammad Riwan and Awais Zahid were also on the score-sheet for the Army. Saeed scored both goals for the KP team.
In the second match, mighty WAPDA were too strong for the youngsters of Punjab, who played out their hearts and it was especially youngster Khubaiab Ahmed, who denied goal-scoring machine Umar Bhutta to score and his top class efforts were duly appreciated by the Olympians who were present at the venue and described Khubaib as future of Pakistan hockey. Aleem Bilal scored a brace for the winners, while Samiullah, Haleem Usman and Rizwan Ali also scored a goal each for WAPDA.
In another match, Mubashir Ali was in red-hot goal-scoring form as he scored 5 goals to help SSGC teach hockey lesson to PAF in 7-1 drubbing. Besides Mubashir, Azfar Yaqoob and Ghazafar also scored a goal each. For airmen, Afraz scored the consolation goal.
Railways and Port Qasim were involved in a top class encounter as they played out a 2-2 draw. Farhan Tariq and Rizwan Ali scored a goal each for Railways while Haris and AB Rehman scored for Port Qasim.
In the last match of the day, Navy and WAPDA Whites played arguably the best match till date, as both teams displayed top class hockey in a thrilling 2-2 draw. Muhammad Sabir and Akbar Ali were on the score sheet for Navy while Rana Waheed and Adnan Anwar scored a goal each for WAPDA-W.