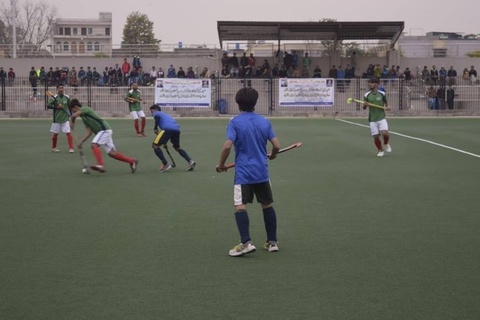 65th Air Marshal Nur Khan National Hockey Championship 2019      Abdul Sattar Edhi Stadium, Karachi,
On the second day of ongoing 65th National Hockey Championship 2019 at Abdul Sattar Edhi Hockey Stadium, Karachi five matches decided where all were proved one sided affairs for the winners.
In the opening match of the day, SSGC team were too good from the onset dominating Islamabad as they clobbered easily, and Islamabad has no response of SSGC’s experience and the winning team forwards punctured the defense line of Islamabad and attacked time and again inside the ‘D’ area resulting scored 13 goals for winning team while Islamabad team netted one goals only.
Army team proved much sharp and agile to Gilgit as they put them under pressure from the opening whistle and didn’t give any chance to Gilgit hockey team to create any threat for them at any time. They easily played according to their plan and attacked with good combination and coordination of their forwards resulting marvelous 30 field goals while losing team failed to score a single goal against the rivals.
In the third encounter of the day, MPCL produced a skillful game to overpowered FATA by 13-0 while Navy defeated Balochistan by 6-0 and NBP crushed Police by 5-1 in the last encounter of the day.
65th National Hockey Championship 2019 Day-2 Results: