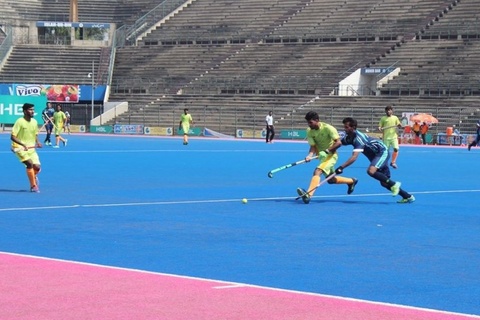 65th Air Marshal Nur Khan National Hockey Championship 2019      Abdul Sattar Edhi Stadium, Karachi,
Five matches decided on the inauguration day of 65th National Hockey Championship 2019 at Abdul Sattar Edhi Hockey Stadium, Karachi. Four matches proved one sided for the winners while PIA vs PAF match was the only fighting match when losing team also resisted otherwise first day matches were one sided affairs.
In opening match KPK team were too good from the onset dominating Gilgit as they clobbered easily by 11-0, and Gilgit has no response of KPK’s experience and the winning team forwards punctured the defense line of Gilgit and attacked time and again inside the ‘D’ area resulting scored 9 field goals and 2 goals on penalty corners, forwards Ismail and Amir played well and netted two goals each for KPK.
In the second match, Port Qasim who put Balochsitan under pressure from the opening whistle as the departmental hockey team single handedly defeated a weal provincial hockey team of Balochistan by 6-0. The regional teams often proved weak in the ranking domestic hockey events but when they failed to score a single goal against the rivals meant that they are much weak as in both matches the regional hockey teams failed to open their account.
Port Qasim demolished the defense line of Balochsitan who went on the defensive game to save them defeat of a big goal margin. Port Qasim scored 5 field goals and one goal on penalty corner. Forward Abdul Rehman scored two goals for the wining team.
In the third match played between Punjab province and FATA, the provincial hockey team dominated in the game and easily won by 7-0, they scored 6 field goals and one goal on penalty stroke.
Punjab hockey team is much sharp and agile to FATA, and also having experience, thus, they did not give any chance to FATA, hockey team to create any threat for them at any time. They easily played according to their plan and attacked with good combination and coordination of their forwards resulting six field goals. M Arsalan and Ashfaq Ahmed showed good skills of hockey and successful to netted two goals each for their team.
In fourth match Sindh hockey team defeated Islamabad by 5-0, it was the fourth match continuously when the defeated team did not score a single goal. The first half proved goal less as both teams tried to take the lead but due to good marking their forwards failed to take the lead.
But later on Sindh increased their pressure and attacking time and again around the ‘D’ area of Islamabad, resulting successful to create some gaps and their forwards successful to score the 4 field goals and one goal on penalty corner.
The last match of the day was in between PIA, vs PAF, both teams started attack on each other, but failed to score any goal, specially PIA, missed few very golden chances of goal scoring when their forwards hit went out inside the goal post. The half time score was goalless between the two teams. But PIA, who was most experienced team of the domestic hockey and record title holder of national hockey championship, took the lead when Ihsan Ullah successful to dragged the ball in the goal post on penalty corner.
PIA successful to double the lead when its forward netted a field goal named Anees, PIA scored its third goal when Ihsan Ullah scored his second goal on another PC.
After conceding three goals, the PAF came out to defensive style of hockey and reduce the margin of the defeat by one goal when it forward Shahbaz scored the solitary goal for PAF in last moments.
Total 20 teams are participating in the championship, which are divided into four groups. Five matches will be played daily while the quarterfinals will be played on August 1. August 2 will be rest day while the semifinals and grand final will be held on August 4 (Sunday).