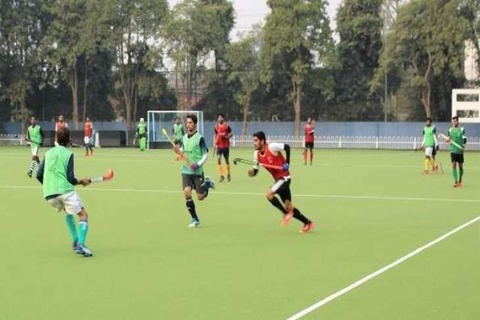 65th Air Marshal Nur Khan National Hockey Championship 2019      Abdul Sattar Edhi Stadium, Karachi,
The 65th Air Marshal Nur Khan National Hockey Championship will be played at Abdul Sattar Edhi Stadium, Karachi, from July 23 to August 7.
The championship will be played according to Tournament Regulations issued by FIH. Departments, regions, and provincial teams will participate in the championship. There will be no age restriction for the players as PHF wants to test maximum number of players.
The format of the championship is likely to be changed. Pakistan Hockey Federation (PHF) secretary Olympian Asif Bajwa indicated in a recent statement that the format would be changed to make the championship more competitive.
The PHF secretary said that ranking and points system would be introduced in all major domestic competitions, including the national championship. Meanwhile, it has been decided that PHF would itself organise the national championship and appoint all officials and technical delegates.
The PHF wants to pick budding talented players through the national championship and train them in the academy which will be established in near future with the collaboration of Asian Hockey Federation (AHF).
PHF was engaged with AHF CEO Tayyab Ikram for the establishment of an academy in Lahore, sources said. It was also learnt that PHF president Brig (rtd) Sajjad Khokhar would participate in the FIH meetings in Switzerland in a couple of days.
The PHF president would seek the help of FIH for resolving the issues of Pakistan team’s participation in the qualifying rounds for 2020 Olympics, the sources added. He would also try to get reduced the fine imposed on Pakistan for not participating in the FIH Pro League.