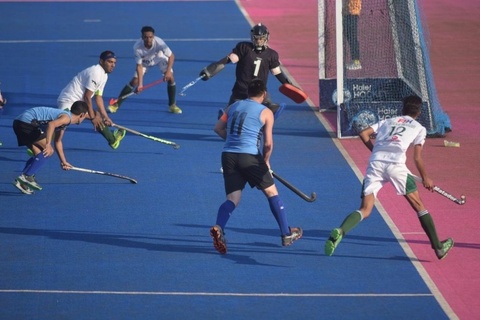 65th Air Marshal Nur Khan National Hockey Championship 2019      Abdul Sattar Edhi Stadium, Karachi,
Pakistan Hockey Federation President Brig (R) Khalid Sajjad Khokhar confirmed that 65th Noor Khan National Hockey Championship will roll into action from the last week of June.
“I am grateful to Pakistan Air Force, who had very kindly promised to help the federation in hosting the mega championship in grand style while we will also take onboard private sponsors as well. We want to pay grand tribute to legendry Noor Khan and other mega stars Pakistan hockey had produced. So besides departments, we have decided to include two or three development squad teams, who will be named after the past greats of Pakistan hockey.”

He said around Rs5 million will be spent on the National Hockey Championship, which will be held at Abdul Sattar Edhi Hockey Stadium Karachi
This championship will not only provide juniors a chance to earn place for the highly important Olympic Qualifiers place in the national squad, which would be held in September or October this year but also provide golden opportunity to those senior players, who are still in shape and have desire to once again play for the country, he added.
“Our doors are open for all the players, who can perform and this championship will provide them yet another chance to showcase their skills and earn a place in the national team. Our focus in the recent past was enhancing fresh pool of players, in which we managed to successfully muster lot of new talented players, who are the future of Pakistan hockey. Trust me, like I had time and again said, I won’t stay for a second, if I feel I had lost that passion and desire to take Pakistan hockey forward.”
“Let me assure all that Pakistan will play in the mega FIH events, including the pro-hockey league and next month FIH board will listen to our side of story and Pakistan will skip ban and also in case we had to pay some kind of penalty for skipping the pro-hockey league, it will be very nominal. I am very optimistic that the FIH will give verdict in favour of Pakistan. We will present a very detailed and fact-based report to FIH board, our lawyer will represent Pakistan and I will also there to assist him.”

Brig Khokhar said it is quite strange and somewhat disrespectful attitude of IPC Minister Dr Fahmida Mirza, who despite making several promises of inviting federation for a meeting, never fulfilled her promise and she is continuously meeting with those so-called well-wishers of hockey, who were always part of previous federations. “If they had any plans or they had the guts to take Pakistan hockey forward, they would have justified their roles, which I had assigned to them. They are used bullets and just want job in federation. In such tight financial situation, how can we offer them jobs? We want to take Pakistan hockey forward and I am honestly working on that.
Appointment of Asif Bajwa as secretary is clear indication that we want to move forward very fast and involve all the past greats, who genuinely want to help hockey and want to contribute towards national cause. I promise that the nation will soon hear very good news in this regard. My doors are always open for all the positive things and I am always more than welcoming to all those, who had the pain and desire to work for Pakistan hockey.”
He said he knew PM Imran Khan is highly busy in performing national duties, but hockey also needs PM’s attention and the federation just just wants PM to spare sometime for a meeting.
“We don’t want funds or financial assistance; we just want to bring into his notice actual ground realities. One thing is crystal clear, federation didn’t received a single penny’s grant form federal government since November 2017. Only Sindh government is helping hockey.
Even then we had planned to start Pakistan Hockey League by the end of this year and we won’t take financial assistance from government. We will involve private sector and this year Pakistan’s dream Premier Hockey League project will meet reality. I am highly disappointed with Haier, our title sponsors, who had signed an MoU till Olympics 2020, but so far only had released Rs 9 million, which is not enough to conduct national championships.
I had called Javed Afridi, who had promised to splash out cash to help hockey, but he never bothered to fulfil promises. They had taken huge mileage in world cup, but not ready to help the way they had promised. We are working on different areas and I assure all that Pakistan hockey will be back on winning ways sooner rather than later,” Brig Khokhar concluded.