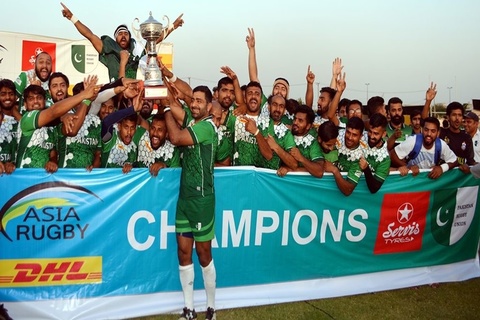 Pakistan rugby team won the Asian Rugby Division-III (C) Championship after leveling the series 1-1 against Uzbekistan here at Pakistan Rugby Academy Lahore Cantt.
Earlier, Pakistan won the first test against Uzbekistan with a big margin of 43-13 while in the second test played here Wednesday, Uzbekistan team defeated Pakistan 38-24 but the hosts won the championship on the basis of better points in both the games. Pakistan has now bright chances of qualifying for the Asian Rugby Division-II.
Uzbekistan were off to flying start as they put the hosts under tremendous pressure right from the word go. They scored their first try through Sanjar Sadullayev in the very first minute to take 5-0 lead. Uzbekistan team scored their second try through Akrom Chorshanbiev which was converted by Ruslan Matkurbanov to stretch their lead to 12-0. In the 21st minute, Akrom Chorshanbiev converted another try to further strengthen their lead to 17-0.
Pakistan players then changed their strategy and started playing aggressive game, which helped them open their account in the 25th minute when Saad Arif scored a try which was duly converted by captain Kashif Khawaja to reduce the margin to 17-7.
The hosts continued to struggle for earning more points but their efforts couldn’t bear fruit. Uzbekistan team, on the other hand, maintained their supremacy and kept on scoring tries and converting them successfully. In the 36th, 39th and 40th minutes, the visitors hammered a hat-trick of tries and also converted all of them to finish the first half having a healthy 31-7 lead.
Pakistan made a good comeback in the second half by displaying better rugby skills and techniques as first they scored a try in the 16th minute of the second half through Muhammad Ali Khan to make it 31-12 and then converted it through Kashif Khawaja to further reduce the margin to 31-14. Uzbek players then fought gallantly and managed another try and converted it to stretch their lead to 38-14.
Pakistani players didn’t lose the hope and continued to struggle, which paid off well as they succeeded in scoring two tries through Faisal Aslam and Kashif Khawaja in the 36th and 41st minutes respectively to reduce the deficit to 38-24. It was all that the hosts could get from the match as the final score was 38-24 in favour of Uzbekistan, but Pakistan won the championship on the basis of better points in both the matches.
Pakistan Rugby Union (PRU) patron Lt Gen (r) Ashraf Saleem graced the occasion as chief guest and distributed prizes among the players. The notables among others were PRU chairman Fawzi Khawaja, president Arif Saeed, vice president Yahya Bhatti, executive committee members Salman Muzaffar, Zulfiqar Malhi, PRA officials, POA Secretary Khalid Mehmood, German Ambassador and rugby lovers.