The 38th CAS Open Golf Championship concluded successfully with Shabbir snatching the crown from rival Matloob in the final round at Airmen Golf Club and Recreational Park in Karachi. 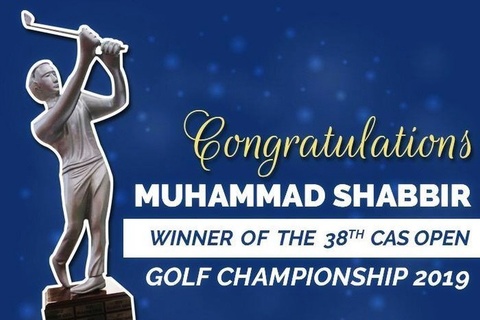 The defending champion of the 37th CAS Open Golf Championship accumulated even-par 72 which saw him eight strokes behind leader and longtime rival Shabbir Iqbal who shot an immaculate 64 at the end of the first day of the championship. Matloob had double-bogeyed the 18th hole which extended the gap wider between him and Shabbir.

While talking of Shabbir, after a performance that was close to his first-round show, that saw him race into an eight-stroke lead, and far from his performance in the second, where he only managed a par, Pakistan’s top golfer carded a bogey-free 66 on the second day of the championship to burnish his lead by a whopping 10 strokes.  He ended the third round on 14-under 202.

Hitting birdies on the 3rd, 8th, 9th, 10th, 16th and 18th holes, Shabbir left closest challenger Mohammad Ashfaq (71) with an uphill task if he is to reel in the leader in the final round. Ashfaq struck birdies on the 2nd,4th and 5th holes but the wheels seemed to come off when he bogeyed the 7th and 12th holes. He hit a birdie on the 16th hole but then bogeyed the very next hole to sit on 212, a stroke ahead of Hamza Amin (68).

Shabbir’s final-round 70 was not as good of a performance as his first-round 66 or his third-round 68 but it was enough for him to post a stunning aggregate of 16-under 272 and win by a massive margin of 12 strokes. Even though he hit a bogey on the second hole, he bounced back with birdies on the 5th and 7th holes. He played par on each hole after that before hitting a birdie on the 18th for the coup de grace.

Shabbir’s long-time rival Mohammad Munir produced the day’s best score of 68 to end in second place. Having fallen 14 strokes behind Shabbir at the end of the third round. Hamza Amin (74) and Mohammad Ashfaq (75) finished joint-third as they ended up at one-under 287. Mohammad Alam’s 71 saw him finish the four rounds on a par score, a shot ahead of Mohammad Safdar (74).

The most startling gap, though, was between Shabbir and Matloob Ahmed, Matloob’s 77 saw him finish at five-over 293 — 21 strokes behind the winner. Whereas, Aania Farooq’s two-day aggregate of 165 saw her claim the Ladies’ Gross title while Abiha Syed was the Net category winner with 146. Retired Air Marshal Farhat Hussain was awarded a car for a Hole-In-One on the par-three second hole. Also, Taimoor Khan won the Amateurs’ title, Mohammad Akram took the Senior Professionals’ crown and Syed Bilal topped the Junior Professionals.

Airmen Golf Club & Recreational Park in joint efforts with Pakistan Air Force (PAF), Pakistan Golf Federation (PGF) and Sindh Golf Association (SGA) organized the 38th edition of Chief of Air Staff Open Golf Championship that was contested on the elegant green course of Airmen Golf Club and Recreational Park in Karachi. This golf event was open to those golfers who are affiliated of golf clubs with Pakistan Golf Federation.