14th Cholistan Jeep Rally striked yesterday from Bahawalpur in which about 120 adventure-hungry car racers have registered to participate in and this action will continue till 18th February. 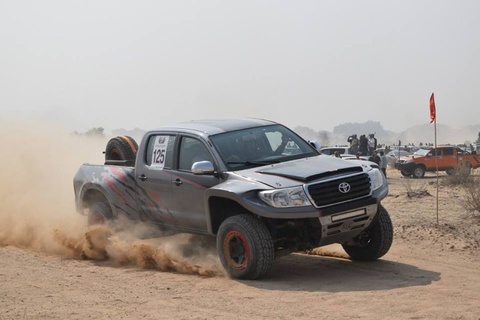 Among the various racers competing to qualify for the further stage of the rally, it was Asif Imam who qualified at the top by 50 Veh and he was followed by Babar Khan who ended up being the second fasted with 1.35 and the third spot was managed by Zain Mehmood who stands as the third fastest up-till now.

The Tourism Development Corporation Punjab (TDCP) has organized this 14th edition of Cholistan Jeep Rally which is hosted by Cholistan News. Desert Rally since it was started in 2005 by the Tourism Development Corporation of Punjab (TDCP) in Cholistan Desert has become Pakistan’s Biggest Motorsport Event. Every year conventionally the rally consisted of a challenging track for the rally drivers More than 100 enthusiastic rally drivers from around the world are expected to participate in this mega event this time as well.

For the very first time, this rally race is covered live by Cholistan News through which it will be much easier for the spectators present at the time as well as the ones at home to watch this exciting race live in its each phase. Commissioner Bahawalpur Division Nayyar Iqbal will flag off the race today at Derawar Stadium.