Olympic silver medallists Belgium crushed Pakistan 5-0 in their crossover match to enter the quarter-finals of the World Cup at Kalinga Stadium in Bhubaneswar, India. 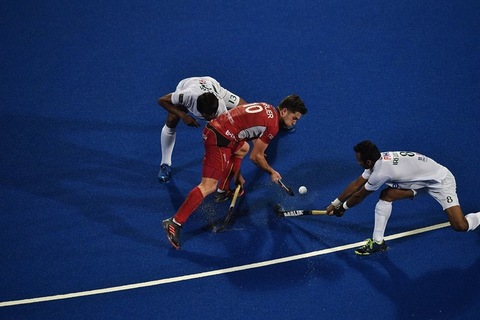 Odisha Hockey Men’s World Cup Bhubaneswar 2018      Bhubaneswar,India
Olympic silver medallists Belgium crushed Pakistan 5-0 in their crossover match to enter the quarter-finals of the World Cup at Kalinga Stadium in Bhubaneswar, India.
Staring the match as favourites, the Red Lions toyed with the Pakistani defence which somehow managed to hold on in the opening 10 minutes.
But once Alexander Hendricks (10th minute) converted a penalty corner, the Pakistani defence broke apart and gates opened up for Belgium.
Besides, Hendricks, skipper Thomsa Briels (13th), Cedric Charlier (27th), Sebastian Dockier (35th) and Tom Boon (53rd) were the other goal getters for Belgium.
The match proved completely a one-sided affair. The Green-shirts lost the hope of survival in the very beginning of the match and seemed tired during the later quarters. After exit of Malaysia and China, Pakistan were the third Asian team to get eliminated.
While Pakistan will pack their bags and return home, Belgium will take Germany in the quarter-finals on Thursday.
The Red Lions, ranked third in the world, came into the match as outright favourites against the world no. 13 Pakistan and they played like champions, dominating the proceedings for major part of the 60 minutes.
Belgium’s first scoring chance came from the very first move in the form of a penalty corner but the Pakistani defence did enough to thwart the danger.
Belgium kept up the pressure on the fragile Pakistani defence and secured back-to-back penalty corners in the 10th minute, the second of which was converted by Hendricks with a powerful low flick to the left corner of the goal.
Three minutes later, Belgium doubled their lead through skipper Briels, who deflected in after being set up by Nicols de Kerpel’s fine work pass from the right flank.
Pakistan improved their game in the second quarter and made some impressive moves but they lacked ideas once inside the opposition circle.
The final pass was lacking from the Pakistanis as a result of which their build-ups hardly troubled the Belgian defence.
Pakistan earned their first penalty corner in the 16th minute but wasted the opportunity while opting for a variation.
Minutes later Ali Shan’s reverse hit from inside the box sailed over the Belgium goal.
The missed chances hurt Pakistan as Belgium extended their lead three minutes from halftime through Charlier whose reverse hit from a tight angle found the back of the net after a getting a slight deflection of Pakistani skipper Ammad Butt’s sticks.
Five minutes after the change of ends, Belgium made the scoreline 4-0 through Dockier, who pushed in after a fine one-two touch play from Charlier and Simon Gougnard.
While Belgium wasted two more penalty corners in the third quarter, Pakistan too got a short corner but Ali Mubashar’s attempt went wide.
Down by four goals, Pakistan knew it was the end of the road for them. It was a one way thereafter as Belgium made all the forays and earned two more penalty corners in the process. The last penalty corner resulted in a penalty stroke as the ball hit the body of a Pakistani defender and Boon made no mistake in converting the chance.
In another match, three-time champions Netherlands rolled over lower-ranked Canada 5-0 to set up a quarter-final clash against hosts India.
Dominating the proceedings, Netherlands scored five field goals through Lars Balk (16th minute), Robert Kemperman (20th), Thijs van Dam (40th, 58th) and Thierry Brinkman (41st) to register the comfortable win at the Kalinga Stadium.