Pakistan will play their cross over match against Belgium on 11 December at 4:15 pm (PST) for the remaining four last eight berths in the Hockey World Cup 2018. 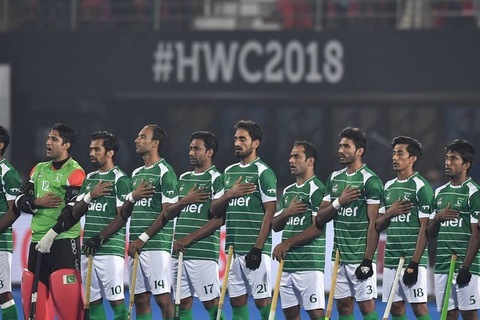 Pakistan will play their cross over match against Belgium on 11 December at 4:15 pm (PST) for the remaining four last eight berths in the Hockey World Cup 2018.

Pakistan suffered a 5-1 defeat against the Netherlands but still sneaked into the knock-out stages of the Hockey World Cup as Germany beat Malaysia 5-3 to maintain their all-win record and seal a direct quarterfinal spot from Pool ‘D’.

The Malaysians crashed out of the tournament as they finished at the bottom of the group with a mere one point. Pakistan finished ahead of the Malaysians on goal difference and will now face Belgium in the crossover match, while Netherlands will be up against Canada in another crossover match the same day.

Pakistan’s last match proved a one-sided affair as the Dutchmen bundled out the Green-shirts easily. The Green-shirts offered some resistance to Holland in the first two quarters, but in the last two, they succumbed to the pressure exerted by World No 4 Holland.


Holland started the game at a fast pace and took lead in the seventh minute when Thierry Brinkman scored the easiest of goals — tapped the ball into an open net. Through counter attack, Pakistan got three penalty corners one after another and finally equalised in the ninth minute when on a rebound of the third PC, Umar Bhutta pushed the ball into the goal, beating the goalkeeper.

The Dutch appealed for a referral but the TV umpire ruled in favour of Pakistan. In the second quarter, a Pakistani defender committed a grave mistake when he passed the ball to his teammate towards Pakistan’s goal, where there were already two Dutch forwards. Seve van Ass and Valentin Verga made a combined move dodging all the defenders of Pakistan. Verga netted the second goal easily, making it 2-1 in the 27th minute.

In the last two quarters, Holland played outstandingly and scored three more goals. In the third quarter, Jeroen Hertzberger found Bob De Voogd unmarked at the far post of the goal and the Dutch scored their third goal in the 37th minute.

The fourth quarter, too, was dominated by the Dutchmen. They got two penalty corners, and struck through Jorrit Croon (47th minute) and Mink van der Weerden (59th minute). Seve van Ass was declared the player of the match. Holland had 34 circle entries, 12 shots on the goal and nine PCs. Pakistan had 10 circle entries and as many shots on goal besides earning four PCs.