Four-time champions Pakistan played out a hard-fought 1-1 draw with Malaysia in a Pool ‘D’ match as both the teams remained in the hunt for a knock-out round berth in the Hockey World Cup 2018. 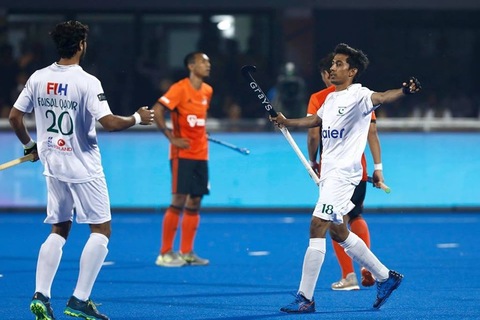 Odisha Hockey Men’s World Cup Bhubaneswar 2018      Bhubaneswar,India
Four-time champions Pakistan played out a hard-fought 1-1 draw with Malaysia in a Pool ‘D’ match as both the teams remained in the hunt for a knock-out round berth in the Hockey World Cup.
After failing to break the deadlock for a long time, Pakistan drew the first blood in the 51st minute through Mohammad Atiq’s field strike before Malaysia restored parity four minutes later when Faizal Saari converted a penalty corner at the Kalinga Stadium to stay afloat in the competition.
The draw meant both Pakistan and Malaysia remained in the fray for the knock-out rounds, having garnered a point each from two outings.
In their next matches, Malaysia play Germany and Pakistan meet Holland. The two matches will decide which two teams qualify for the next stage.
Both Pakistan and Malaysia fought well but were rather defensive as no goal was scored in the first three quarters.
Germany lead the pool with six points and confirmed their berth in the quarter-finals when they thrashed European heavyweights Netherlands 4-1 in a completely one-sided affair earlier in the day.
The Dutch have three points while Pakistan and Malaysia have one each. Malaysia are placed last because of an inferior goal difference. Pakistan had earlier lost by a solitary goal to Germany, while Malaysia were thrashed 0-7 by the Netherlands.
In the encounter between world number 12 Malaysia and number 13 Pakistan, there were hardly anything to separate the two sides.
Pakistan dominated possession but the well-organised Malaysian defence did well to hold them at bay and create occasional scoring chances with fast counter-attacks.
Atiq gave Pakistan the lead when he scored off an excellent pass from Mohadmmed Rizwan Senior. The striker first received the pass, created space on the right, took a 360 degree spin to shoot the ball past Malaysia goalkeeper Kumar Subramaniam.
Malaysia desperately needed a goal to stay afloat in the tournament and five minutes from the final hooter their efforts succeeded when they earned their fifth penalty corner and Saari was up to the task, flicking the ball high to the top right corner.
Pakistan continued to put pressure on the rival defence in the dying minutes but the Malaysians did well to defend sturdily and hold on to earn a point.

“I think the guys played very well today, Being down one goal and then getting it back to 1-1 is not easy, so I think we did well. We know there is a big goal difference, but maybe that can change in the last round of matches.” Subramiam said after the match.

The Netherlands took the lead against Germany when Mirco Pruijser struck in the 13th minute. However, they failed to extend their lead as the Germans gradually started to dominate the proceedings from the second quarter onwards.
Germany’s Mathias Muller found the back of the net to bring his team back on level terms in the 30th minute.
After a goalless third quarter, the fourth and final period saw Germany completely dominating their opponents as Lukas Windfeder’s powerful drag-flick into the bottom right corner made the issue 2-1 in the 52nd minute.
Two minutes later, Marco Miltkau extended Germany’s lead before Christopher Ruhr converted a penalty stroke in the 58th.