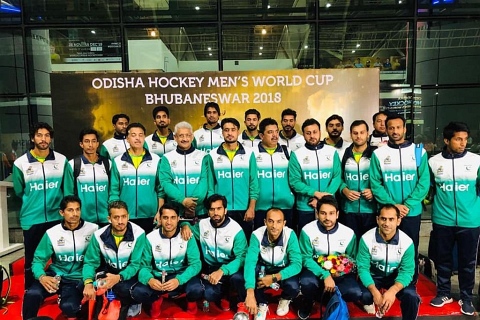 Odisha Hockey Men’s World Cup Bhubaneswar 2018      Bhubaneswar,India
Four times World Champions Pakistan will begin their campaign against Germany on 1st December at 6:30 pm (PST) in the Odisha Hockey Men’s World Cup Bhubaneswar 2018 at  Bhubaneswar, India.
The Pakistan hockey team historically has been the most successful side in the history of the World Cup. With an astounding 4 titles against its name, Team Pakistan would be likely to inspire from their rich legacy and heritage in the hockey world.
Pakistan, a once dominant force at the World Cup, is now a team with an interesting mix of experienced players as well as new promising talent.
In the first eight editions of the World Cup, Pakistan reached the final on 6 occasions and lifted the trophy for a total of 4 times. They won their titles in Barcelona 1971, Buenos Aires 1978, Mumbai 1982 and Sydney 1994.
In the recent Asian Champions Trophy held in Oman  earlier this month, Pakistan were declared Champions alongside India.
Having won a total of 53 matches in 84 outings, Pakistan has the best overall record at the Hockey World Cups. A record that would give great heart and confidence to the new generation of Pakistan Hockey.
Two times consecutive World Champions Germany won their titles in 2002 and 2006 where they beat Australia to rule the world as the Hockey Champions.
Meanwhile, Germany hopes of repeating their 2014 triumph when they beat Pakistan in the final of the FIH Champions Trophy.

Though the German team had a disappointing outing last year at the Odisha Men's Hockey World League Final in Bhubaneswar, where they lost Bronze Medal match to India. Now the German team is vying for the top spot at the prestigious event.
Four times World Champions Pakistan team has great talent and the ability to cause an upset. Green Shirts captain Muhammad Rizwan Sr will be single-minded in his ambition to ensure that his side performs to the best of their abilities in Bhubaneswar.
However, Pakistan’s recent performances have shown their consistency, gameplay and performance that would be expected of them at the elite level.
4th position at the Asian Games and Joints Champions at the 5th edition of the Asian Champions Trophy in Muscat that concluded recently, Pakistan would be playing their Pool D matches with much confidence and flare.
With Pakistan having a rich history at the World Cup and their current squad and recent achievements kept in mind, they could be a force to be reckoned with in the Hockey World Cup 2018. Pakistan has 4 titles against their name, the most by any side ever.
One shall have to wait and see if they can be crowned Champions a 5th time at the World Cup 2018 in Bhubaneswar, India.