DHA Rugby Club’s team will depart today to take part in 2018 Emirates Dubai Rugby Sevens which will roll into action tomorrow and will continue till 1st of December at The Sevens Stadium in Dubai. 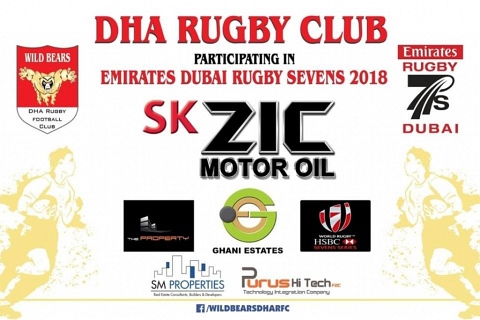 The Dubai Rugby Sevens sees the world’s top rugby players battle it out in fierce competitions and wow the crowds. The 14 member squad from DHA Rugby Club is all set to take part in this three-day rugby event and the team will depart for Dubai today to show their strength in the upcoming matches of Dubai Rugby 7s event.
DHA Rugby Club President, Tariq Niazi, at the press conference said that the boys have prepared well for this mega event and hopefully, they will perform really well and try to win laurels for the club as well as for the country. The players have been trained well during the two-month long camp, where a great focus has been given to improve the fitness and skills of the players. I hope the boys will do wonders during the event and succeed in qualifying for the next event.
Bilal Qaisar, captain DHA Rugby Club’s team said that he and his team have worked really hard during the training camp, and their efforts will surely bear fruit during the Dubai Rugby 7s event.
“We all are well-prepared and eager to excel during the event. Hopefully, the boys will play according to given plan and try to win all the three pool matches." He added. Qaisar will lead the team and Usman Chaudhry will be his assistance during this event.
The 14 member squad is namely stated below:
1. Khurram Ali
2. Waqas Ali Khan
3. Shamweel Khan
4. Ubaid Ullah
5. Areeb Ali
6. Hasham Fayyaz
7. Hassan Ahmad
8. Kamal Ahmad
9. Raheen-ur-Rehman
10. Zaryab Ahmad
11. Bilal Qaisar (Captain)
12. Usman Chaudhry (Assitant)
13. Tariq Niazi (Coach)
14. Mehmood Ali (Manager)