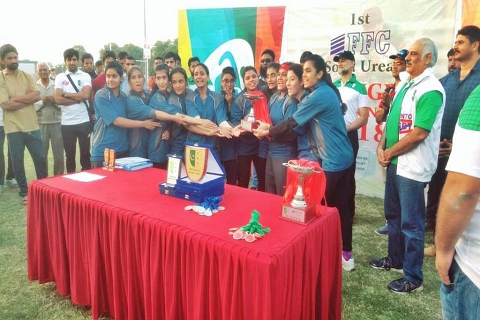 Pakistan Rugby Union in collaboration with Fauji Fertilizer Company (FFC) organized the Sona Urea 7s Rugby Championship for the very first time.
A total of 20 teams of various cities from all around Pakistan were seen fighting each other in the matches which were contested in three (3) different categories of Adult Sevens, Under-18 years of age Girls and also Under- 16 years of age Boys Sevens, so as to earn top honors in the championship. Most of the participating teams belonged to Southern area of Punjab.
In the Men’s 7s Rugby final, Lodhran players demonstrated excellent game and overcame Muzaffargarh in every department and won the title. Shahbaz struck two tries for the winners while Riaz and Shahzad contributed with one try each. While Fort Abbas won the title of Boys U-16 category, the team outscored Lodhran by 15-5. For the winning team, Umair scored two tries and Shahzad contributed one while from the losing side, the only try was scored by Hassan.
Whereas, Karachi claimed the Girls U-18 title as the team crushed Fort Abbas by 5-0 through Kashaf who struck the only try of final for Karachi.
FFC Goth Machi Resident, Director Brig (R), Toufeeq Tahir was the chief guest on the event and he along with Pakistan Rugby Union Chairman, Fawzi Khawaja, distributed prizes among the high achievers of the championship.
This was a tremendous breakthrough for Rugby sports in Pakistan with one of the country's biggest brands backing it up in this championship.