The Men’s Hockey World Cup 2018 will be held in Bhubaneswar,India from November 28 to December 16 while trials for the selection of Pakistan team will be held on 13th and 14th in Lahore. 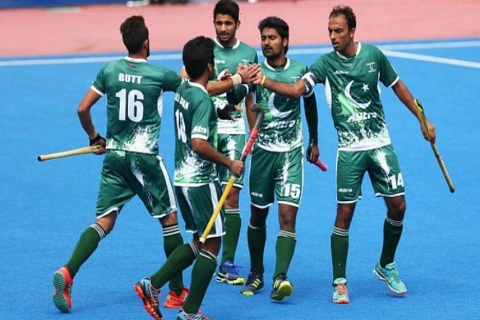 Odisha Hockey Men’s World Cup Bhubaneswar 2018      Bhubaneswar,India
The Men’s Hockey World Cup 2018 will be held in Bhubaneswar,India from November 28 to December 16 while trials for the selection of Pakistan team will be held on 13th and 14th in Lahore, where the Green-shirts’ training camp is continuing.
The chairman selection committee Islahuddin will be there with his team members. PHF president and secretary are also expected to be present on the occasion.
The Men’s Hockey World Cup 2018 will be held in Bhubaneswar,India from November 28 to December 16 with sixteen top sides taking part in the 19-day tournament.The teams are divided into four pools - Pakistan, who is ranked No. 13 in the FIH Rankings, are placed in Pool D alongside Netherlands,Germany and Malaysia.
Islah said that World Cup was one of the biggest competitions of hockey world and it would be completely different from the Asian Games and Asian Champions Trophy. “We will see the players’ form, fitness and also consider reports of team manager about their pervious performances,” he said.
He said that the players should remember that two European teams were in their pool. They would have to give their hundred percent to qualify for the next round, he added. He said the Green-shirts had capabilities to advance, but for that they would have to control their missing of goal-scoring opportunities and make their defence impenetrable.
“The positive thing is that the team is a blend of senior and young players,” Islah added. He said that Pakistan reached the final of the Asian Champions Trophy last month, but the performance of the defenders and the goalkeeper was exposed, although Pakistan was supposed to have a strong defence.
Pakistan conceded three goals against India, and four goals against Malaysia. He said that goalkeeper Imran Butt would have to improve his performance in the World Cup. “Imran is the most experienced goalkeeper in the country and the only option for us because the other two goalkeepers don’t have much experience,” said the chief selector.
About forwards and PC specialists, Islah said that the team would get four or five chances of scoring goals in every match. “The Green-shirts will have to grab these chances,” he said. He said the players should be strong not only physically but also mentally. “Playing on Indian soil will be tough,” he added.