India and Pakistan declared joint winners of the 5th Hero Asian Champions Trophy 2018 after a thunderstorm and heavy showers forced the final to be abandoned at the Sultan Qaboos Sports Complex in Muscat,Oman. 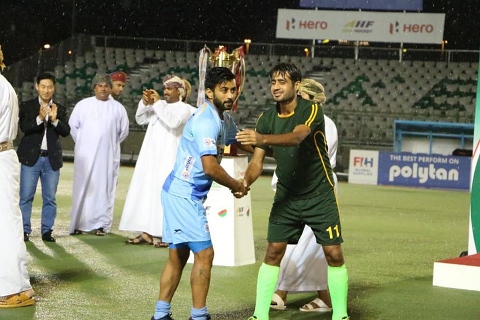 5th Hero Asian Champions Trophy 2018      Sultan Qaboos Sports Complex in Muscat, Oman
At the Sultan Qaboos Sports Complex in Muscat Oman, the final of the Fifth Hero Asian Champions Trophy Hockey Tournament held between Pakistan and India, the nations which have equally shared the four previous titles.
India and Pakistan declared joint winners of the 5th Hero Asian Champions Trophy 2018 after a thunderstorm and heavy showers forced the final to be abandoned.
Pakistan was appearing in the fifth consecutive final and India had missed just once.
The storm arrived just ahead of the title encounter. After waiting for the storm to subside for more than an hour, it became apparent that it would not be possible to start the match on Sunday. After a meeting between the officials of the two teams and the Technical Delegate, Brian Fernandez of Malaysia, it was decided that the two be adjudged joint winners.

India won the toss of coin supervised by His Highness Sayyid Taimur Asaad Tariq Al Said. Indian captain Manpreet Singh won the toss and earned the right to take home the trophy of the biennial tournament for the first year. It will be given to Pakistan for the next year.
The tournament gold medals were presented to the Pakistan players. Asian Hockey Federation’s Chief Executive, Dato Tayyab Ikram said gold medals will soon be sent for the Indian players.
The following players were awarded individual recognition:
Emerging Player of the Tournament: Abu Bakkar Mahmood (Pakistan)
Hero Player of the Tournament: Akashdeep Singh (India)
Best Goalkeeper of the Tournament: P.R. Sreejesh (India)
Highest Scorer of the Tournament: Faisal Saari (Malaysia).
Earlier, Malaysia claimed the bronze medal by prevailing 3-2 in the penalty shootout against Japan after the two teams were tied 2-2 in the regulation period.
In a dramatic shootout, Japan faltered on their first two attempts while Malaysia scored on both. Then came Malaysia’s turn to miss and they muffed the next two attempts, while Japan scored both of these to be 2-2 level after four shootout attempts.
Tengku Tajuddin clinched the issue for Malaysia with the fifth shootout after Wataru Matsumoto’s shot for Japan rebounded off the post. Aiman Nik Rozemi and Norsyafiq Sumantri had earlier scored for Malaysia, while Mahran Jalil and Syed Cholan failed to do so.
For Japan, Hiromasa Ochiai and Hirotaka Wakuri found the target in the shootout, but Koji Yamasaki and Seren Tanaka faltered. In the regulation period, Japan took the initial lead through a field goal from Kenji Kitazato in the 18th minute, only to see Saari equalize with a penalty corner two minutes later.
Saari’s was again on target in the 46th minute with a field goal for Malaysia, but even their lead was short-lived. This time Wakuri scored in open play to equalize for Japan within two minutes and the contest went to the shootout.