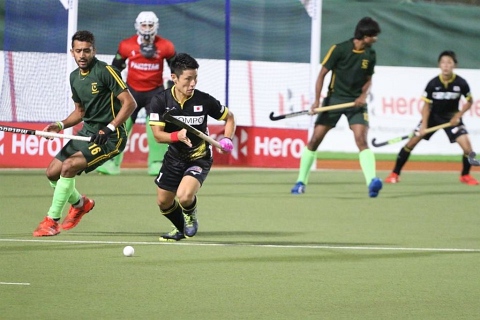 5th Hero Asian Champions Trophy 2018      Sultan Qaboos Sports Complex in Muscat, Oman
Two-time champions Pakistan banked on Mubashar Ali’s penalty corner conversion to earn a 1-1 draw with Asian Games gold medalists Japan in their fourth match of the round robin phase of the Hero Asian Champions Trophy Muscat 2018 at the Sultan Qaboos Sports Complex.
Captain Kenji Kitazato put Japan in the lead in the 12th minute when he swapped passes with Hirotaka Wakuri to flick into the boards. Ali restored parity for Pakistan in the 25th minute with a low penalty corner drag-flick.
The second half saw both teams squander several scoring opportunities to split two points from this encounter.
In their last encounter, Japan had scored a shock win over Pakistan in the semi-finals of the Asian Games in Jakarta and went on to defeat Malaysia in the title encounter to claim their first gold medal.
Pakistan, with seven points from four matches, is in the third place in the standings behind India and Malaysia, while Japan is on four points from as many games.
Pakistan now have two wins, one defeat and one draw.
Today,Pakistan will take on Malaysia at 7:55 pm (PST) in their last outings of the preliminary league, which will be followed by the top four teams advancing to the semi-finals.
Pakistan team manager Hasan Sardar and Japan coach Siegfried Aikman were left ruing the missed opportunities.
Sardar was not satisfied with the result, although he said the team played well. “We played well, but missed a lot of chances. We should have scored at least two more goals,” said Sardar.
Aikman insisted that Japan should have emerged winners from this encounter. “I’m disappointed with the draw. We created a lot of chances and should have won this one,” said Aikman, who has made six changes to his squad of the Asian Games because Japan does not have to prepare for the World Cup starting next month.
“Our players are here to learn. We played a mature game today and the young boys have improved with every outing,” he said.
The four Asian teams who have qualified for the World Cup are hosts India, Pakistan, Malaysia, and China.