Penalty corner shooter Aleem Bilal scored a hat-trick to boost Pakistan to an 8-1 victory over host Oman in the Hero Asain Champions Trophy at the Sultan Qaboos Sports Complex in Muscat, Oman. 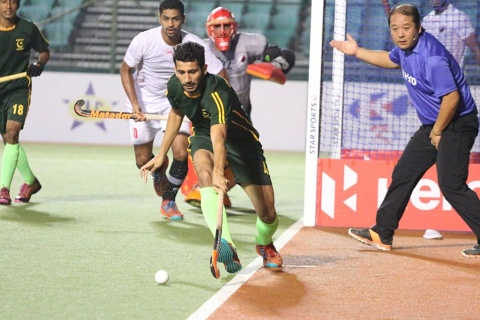 5th Hero Asian Champions Trophy 2018      Sultan Qaboos Sports Complex in Muscat, Oman
Two-time champions Pakistan put one foot into the semi-finals as they rode on a hat-trick from penalty corner shooter Aleem Bilal to outplay Oman 8-1 for their second win in three outings of the Hero Asian Champions Trophy Hockey Tournament at the Sultan Qaboos Sports Complex in Muscat, Oman.
Against the 33rd ranked hosts, the 13th ranked Pakistan four in each half with the Omani goal arriving in the last seconds of the match via their third penalty corner of the evening.Bilal scored a goal each in the initial three quarters to become only the second player to score a treble in a match during the ongoing tournament. Bilal fired the first two goals for Pakistan in the 13th and 18th minutes with stinging penalty corner flicks and then returned to complete his hat-trick in the 39the by sending a drag-flick into the net.
In between, Bilal played an assist role in another penalty corner conversion as he squared the ball to Muhammad Irfan, who sounded the boards with a firm shot.
With six points and an imposing goal-difference in their favor, Pakistan can only be denied a place in the knock-out semi-finals if they falter to big losses in the remaining preliminary round fixtures against Japan and Malaysia, the two teams that featured in the final of the Asian Games at Jakarta in September.
Before Pakistan’s goal rush, Oman played a competitive first quarter, conceding the lead only in the 13th minute on Bilal’s rasping drag-flick into the net.
Bilal was again on target for Pakistan’s second goal five minutes later with a low shot that sounded the boards by beating the outstretched hand of custodian Fahad Al Noufali.
Muhammad Irfan Jr. deflected in a long diagonal ball from left in the 22nd minute and Ammad Butt scored in penalty corner action in the 26th to give Pakistan a 4-0 lead at half-time.
Pakistan continued to make the penalty corners count as Bilal squared the ball to his left for Muhammad Irfan to score the fifth goal in the 34th minute. Two minutes later, Bilal duly completed his hat-trick.
Abu Mahmood capitalised on a rebound from the goalkeeper in goalmouth scrimmage in the 27th minute and Muhammad Atiq rounded off the scoring with a field goal in the 52nd.
Despite the big loss, Oman had their moments in the match and came close to scoring on a couple of occasions. They salvaged a consolation goal when Mohammed Al Lawati scored in the last minute of play.
Five of Pakistan’s goals came off penalty corners where Aleem Bilal shone with three conversions.
Oman had their best spell in the third quarter when through swift turn overs they entered the Pakistani circle quite a few times and created chances including two penalty corners. But they were let down by poor finishing.
Pakistan now has six points from three with two wins and one loss. Now Pakistan will face Japan at 7:55 pm (PST) on 24 October 2018.
Scores:
Pakistan:
13 Aleem Bilal (13"),(18"),(39")
13 Aleem Bilal (18"),
7 Muhammad Irfan jr (22"),
16 Ammad Butt (26")
07 Muhammad Irfan jr (22"),
16 Ammad Butt (26"),
08 M. Irfan Senior (34"),
27 Abu Bakar Mehmood (45"),
18 Muhammad Atiq (52")
Oman:
21 Al Lawati  Mohammed (60")