Pakistan put a shiny start as they registered facile 3-1 victory South Korea while opposite story against India in the Asian Hockey Champions Trophy 2018 at the Sultan Qaboos Sports Complex in Muscat. 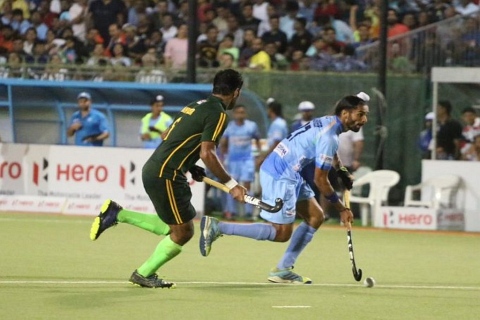 India did not have a great start to the match as Pakistan looked a superior side in the first quarter of the game as India struggled to penetrate the Pakistan defence.

However, a moment of inspiration from Manpreet in the second quarter of the game saw India equalise 1-1 against Pakistan. The match was evenly poised at the end of the first half as both the teams were looking to extend the goal.
Mandeep Singh's cheeky goal in the 33rd minute of the game doubled India's lead in the game. The Indian side started to look more confident as they made repeated attacks in search of a third. Mandeep was creating a problem for Pakistan with his cheeky and threatening runs down the middle but Pakistan did well to hold him off.
Pakistan got a penalty corner in the third quarter but failed to capitalise as the India defence stood tall. Young Dilpreet Singh found his fourth goal of the tournament to not only extend India's lead but also ensure a win. Captain Manpreet was adjudged as the man of the match.
After two matches, Pakistan has one win and one loss now Pakistan will face Oman in their third pool match at 10:00pm (PST) on 22nd October.