Faisalabad dominates Fort Abbas by 15-10 and claim the win of the title in DELL Gaming U-16 Boys Sevens Rugby Championship 2018 which was held at Pakistan Rugby Academy in Lahore. 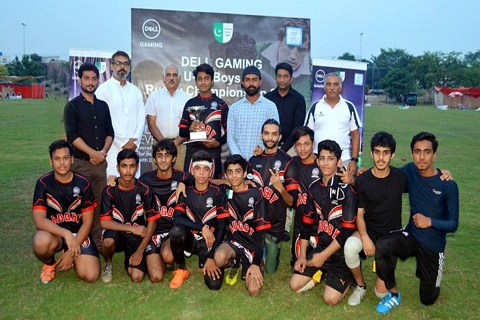 Both the teams made an incredible start in the game but Fort Abbas came out much stronger in the first half with securing two try scored by Ali Raza and finished with the team leading the first half into the game.
But Faisalabad's Rugby team came from behind from the start of the second half through Fahad and Ali who scored one try each to level the score.
However the match was levelled at the end but as it went into extra time on sudden death, Faisalabad player Fahad scored an incredible touchdown to win the championship for his team.
Pakistan Rugby Union (PRU) in collaboration with DELL Gaming Pakistan organized the U-16 Boys Sevens Rugby Championship 2018 to promote the young talent of Pakistan that featured a total of 9 teams from all over Pakistan which were divided into two groups each and only the boys under the age-group of 16 years were eligible to participate in the event.
Sajjad Ali from Dell Pakistan along with Pakistan Rugby Union’s Chairman, Fawzi Khawaja and Secretary, Khurram Khawaja distributed the prizes among the participants and the winning team players at the closing ceremony of the U-16 Boys Sevens Rugby Championship 2018.