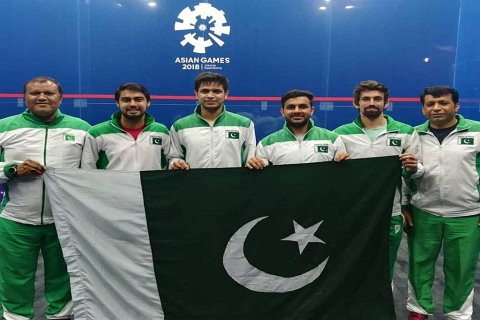 18th Asian Games 2018      Gelora Bung Karno Main Stadium, Jakarta
Asian Games are continued in full swing where Pakistan managed to win 3 bronzes medals with the hope to win Gold/silver in hockey, Volleyball, Athletics and Squash.
Athletics:
Pakistan achieved a season’s best in athletics as they qualified for the final in men’s 4x400 meter relay event with the timing of 3:08.20 minutes to claim the fifth position in heat one but qualified for the final, finishing eighth overall out of 11 competing countries in Asian Games.
Baseball:
Baseball men's team consolation round – match one was played between Pakistan and Indonesia today in which Pakistan went undefeated to win their second match by 10-2 that was staged at Rawamangun Baseball Field in Indonesia.
Volleyball:
Pakistan won a thrilling Volleyball match against China by 3-2 in their semi-final for 7th to 12th position in the Volleyball competition with the final score line of 28-26, 25-19, 18-16 at the 2018 Asian Games.
Squash:
4th seeded Pakistan defeated Republic of Korea by 2-0 to book berth in the semifinal of Men’s squash team event.
Hockey:
Japan ended Pakistan’s hopes of reaching into the final of hockey by beating the Green-shirts 1-0, now Pakistan will face India for Bronze in Asian games on 1st September at 3:30 pm (PST).
Table Tennis:
Pakistan Table tennis start Muhammad Asim Quershi put a shiny start as today he won the round of 64 match against Negra M Bima Abdi of host Indonesia by 4-0. Asim lost to Achanta Schanta Sharath Kamal of India by 0-4 in round of 32 match.
Muhammad Rameez lost to Muhammad Abdul Hussein of Qatar by 4-1 in round of 64.
Rugby:
Ruthless day for Pakistan rugby team at Asian Games as today they lost their match against Hong kong and Thailand by 5-64 and 0-43 respectively.
Sepaktakraw:
In Sepaktakraw Pakistan lost their match against Nepal by 2-0.