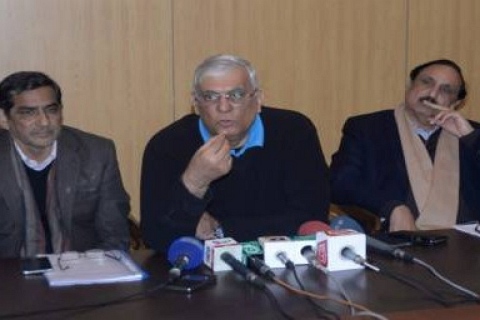 The elections of the National Olympic Committee (NOC) Pakistan will be held here on January 23 with observers from the International Olympic Committee and (IOC) and the Olympic Council of Asia (OCA) monitoring the elective meeting. Addressing a crowded press conference at the recently vacated Olympic House, Pakistan Olympic Association (POA) president Lt Gen (r) Syed Arif Hasan said he would be contesting the elections for the fourth time. “As per agreement reached at Lausanne in Switzerland on October 17, 2015, under the aegis of the IOC, we have sent invitation letters to the Athletics Federation of Pakistan (AFP), the Pakistan Judo Federation (PJF) and the Pakistan Cycling Federation for participation in the upcoming elections,” Arif said. POA secretary general Muhammad Kahlid Mahmood and Pakistan Volleyball Federation president Chaudhry Mohammad Yaqoob among others were also present on the occasion.

To a question, Arif said phase one of the Lausanne agreement had been completed. “The first clause of the agreement has already been implemented as Akram Sahi group handed over keys of the Olympic House to POA a few days ago in the presence of IOC and OCA observers. “But they still have not withdrawn the frivolous cases filed in different courts of law against the POA. They have to fulfil all the conditions in the agreement. Once they fulfil the agreement, these national federations – judo, athletics and cycling – are likely to be re-admitted into the Olympic fold after approval of the POA General Council,” Arif added. The POA chief said if any group or federation wanted to extend the date of the elections, the NOC Pakistan would look into it. “We can extend the date of the elections if someone comes up with genuine reason.” Arif assured that the elections would be held transparently, since they would be conducted under the IOC and OCA charters. Arif said the rules regarding the elections would be dispatched to all national sports federations in next couple of days, according to which the nomination papers would be made available 14 days before the day of elections.

South Asian Games 2016: Arif said Pakistan would take part in the South Asian Games to be held in India next month. “Pakistan will participate in 20 disciplines of the mega event. Archery, athletics, badminton, basketball, boxing, cycling, handball, hockey, kabaddi, kho kho, shooting, squash, swimming, table tennis, taekwondo, tennis, volleyball, weightlifting, wrestling and wushu are the events in which our 400 plus strong contingent will fight for top honours.” To a question, Arif said Pakistan would participate in the SA Games subject to the approval of the Pakistan government. “Pakistan managed to grab second place in SA Games, despite many problems, in 2012.” He said the POA was in touch with the Pakistan Sports Board (PSB) as well as the foreign office. The South Asian Games will be held in the Indian cities of Guwahati and Shillong from February 6-16.

Indian delegation in Pakistan: Arif said a four-member Indian delegation had arrived in Islamabad to ensure Pakistan’s participation in the South Asian Games. “India wants the presence of Pakistan in the event at all costs. The Indian delegation will meet top officials of the Pakistan Sports Board and the Pakistan Olympic Association. It will also invite the federal minister for Inter-Provincial Coordination (IPC) Riaz Hussain Pirzada for witnessing the spectacle.” Arif said Pakistan would participate in the South Asian Games as the event was not that of India but of the SAARC nations. “The Pakistan government has also issued strict directives to the sports bodies to ensure the country’s maximum participation, particularly of women.” Arif said due to security concern the Pakistan contingent would proceed to Guwahati and Shillong by air. “No ground rout will be taken,” Arif concluded.