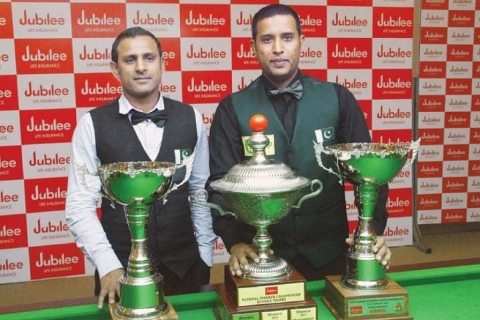 
It to be mention here that former world champion and seasoned campaigner Mohammad Yousaf has won the national championship for record 13 times in the past.


Asif started the match as he straightaway won three frames but then third seed came strongly to win next four back-to-back frames and takes lead by 4-3. After down to 1 frame Asif won next two frames but Bilal defeated Asif yet another time in the 10th frame to level the game 5-5.


At that stage of the game, Asif pulled the momentum of the game in his hands and won next three games to clinch the title for the record third time.
Asif scored a frame of 83 in the first frame but Bilal hammered four successive breaks of 63, 60, 59 and 77 in the fourth, fifth, sixth and seventh to shift the balance in his favor. Asif then registered back to back breaks of 61 and 79 but Bilal once again drew level by piling up an elegant break of 87 in the 10th frame.