Another qualifier from KPK Aakash Rafique came to limelight as he thrashed former National Champion and fourth seed Shahid Aftab by 4-1 in the ongoing Insurance 43rd National Snooker Championship at Karachi Gymkhana. 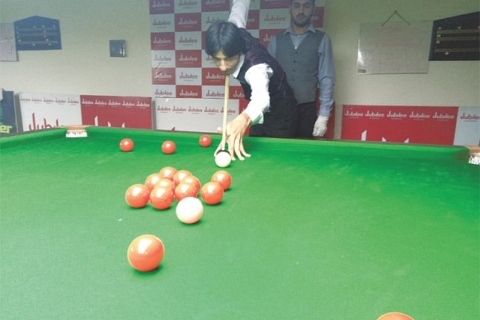 Aakash Rafique earlier had won two matches against Mohammad Shahzad straight and Musaddiq Mehmood by 4-1 is now inches away for making into the knockout stage from group D. Rafique won two successive frames but in the third frame Shahid unleashed his talent to win the third frame by 95-0 but once again he got off-track as Rafique won the next two frames and won the match by 54-40, 67-28, 0-95, 74-37, 69-30.


The two top seeds, Asjad iqbal and Mohammad Asif meanwhile extended their unbeaten streak. Asjad was down but he came hard on the opponent qualifier Mohammad Imran from KPK and won the match 4-1 by 29-60, 80-43, 79-15, 73-1, 61-13 and register third consecutive victory in Group A.


Sajjad seems not to be in his tone as he lost both of his group matches. He lost against Sindh’s Sohail Shahzad by 2-4 and also got defeated by KPK’s Amir Shahzad with the identical 2-4. After failing to finish in top 12 to get direct entry in the event, Sajjad had qualified from Punjab Cup.