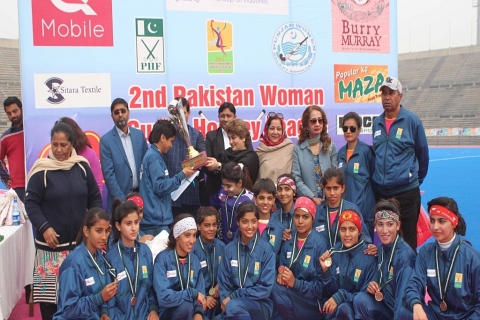 2nd Women Hockey Super League      National Hockey Stadium
On the final day of the Women Hockey Super League, thrilling fixture was played between Lahore Lions and Peshawar Deers where Good up and down stuff ensued with fine moves from both the sides but Lahore Lions thwarted Peshawar Deers by 1-0 and seals the title of Women hockey super league.
In the first half, Peshawar earned a penalty corner through their outstanding player Maira Sabir but she failed to cash on it but in the 24th minute, Lahore has their first PC. After three touches ball reached Areeba Sarwar close to the goal who brilliantly dived to flick the ball into the net.
In the second half, both the sides entering the opposite circle where Lahore earned six PCs while four came Peshawar’s ways and the match ended on 1-0 in Lahore favors.