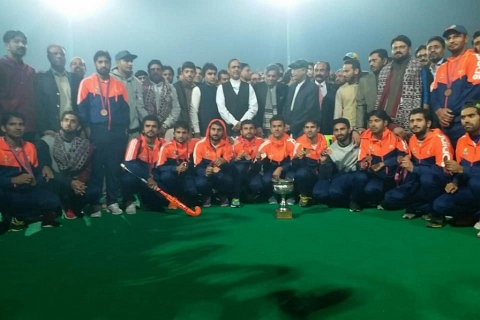 
The Jam packed Sukkur stadium was electrifying and it witnessed a thriller between the two sides as both the teams started the match with high pace. The NBP international star Abubakr converted the penalty corner in the 13th minute of the match and put his team ahead but the lead did not last longer as Qasim from WAPDA netted the ball six minutes later through a penalty corner and levelled the score 1-1.


The score was 1-1 till the half time. Two minutes after the halftime, Bankers got lead once again through Abubakr to make it 2-1. After conceding the second goal, WAPDA once again played with charge but bankers defended and blocked its goal post equally well. WAPDA were on fire in the dying moments of the match but National Bank defense line did not allow them to convert any other goal and the bankers won the final 2-1.


Earlier, the third position match was contested between SSGC and Navy and SSGC shocks the sailors 3-0 to finish on the third position. Rana Sohail converted 2 goals while Zeeshan Bukhari netted the ball once for SSGC.
Khursheed Shah, leader of the opposition at the National Assembly was the chief guest, distributed the prizes. He lauded PHF for allocating the national championships to Sukkur for the first time.