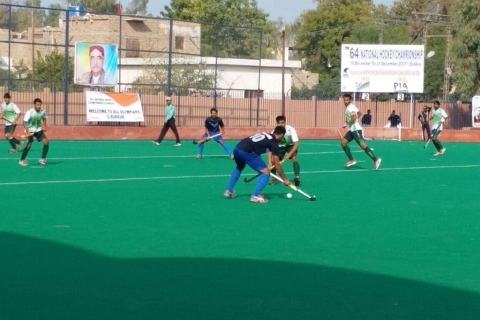 
In the first match, defending champions PIA nearly misses the scare of defeat against the Custom team who displayed extraordinary show of their talent but finally the experienced PIA team defeated the challenger 4-3. Ehsanullah scored 2 goals for PIA while Muddasar Abbas and Usman Ghani contributed 1 goal each. Salman Hassan, Shahbaz and Farhan netted the ball once each for Customs.


Second match was played between the debutant ZTBL and Railways where the newcomers in a thrilling match overpowered Rail-men by 4-3. Shahzaib Khan and Hammad Anjum scored a brace each from ZTBL while Mohsin Javed, Zaheer Hussain and Muhammad Shahhryar scored a goal apiece from Pakistan Railways.


National Bank in the third match of the day thrashed Port Qasim Authority by 9-0. Port Qasim team was totally helpless against the bankers. Dilber, M.Attique and Arslan Qadir netted the ball twice while Hafiz, Abubakar and Attique Arshad contributed 1 goal each. National Bank defense was rock solid and they did not allow PQA to score any goal.


In the last match of the day, Punjab overpowered Gilgit-Baltistan in a once sided contest by 7-0. Ahmad Farhan fired a hat-trick while Ahmer Ali added 1 brace and Muzamiil Hassan & Jahangir Ali contributed 1 goal each.