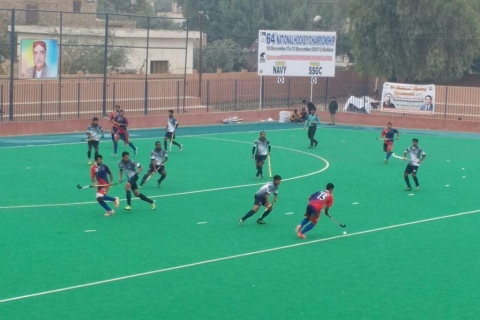 
Mubashir from Sui Southern Gas Company scored both the goals for his team while sailor Asad Aziz scored the only goal from Pakistan Navy. In another encounter the newly raised Fauji Fertilizers Company which appeared for the first time in national championship outsmarted Police by 2-1. Yaqoob and Wasim Akram scored 1 goal each from FFC while Mohammad Mateen was the lone scorer for Police.


Two matches in the provincial teams were decided where FATA stuns Islamabad by 3-0. Yaar Jamal scored 2 goals while Abdul Haneef netted the ball once for FATA. In another match, hosts Sindh overpowered Balochistan in a once sided match by 4-1. Aamer, Yasir, Ismaeel and Abdullah scored 1 goal each for Sindh while only goal came from Balochistan through Mohammad Aslam.