The 64th edition of National Hockey Championship commences at the newly-laid Astroturf in Sukkur. 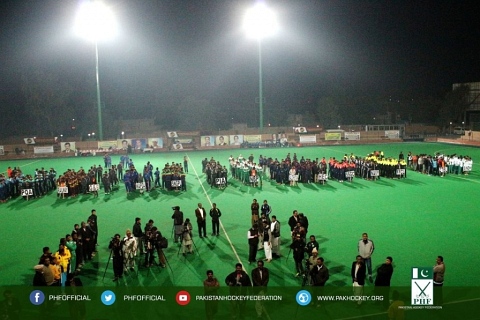 
On the first day of championship 4 matches were played, Gilgit-Baltistan wins the match against FATA 3-2. Police defeated Port Qasim 2-1 while SNGPL beats HEC 5-2 and the match between Army and Customs ended on 1-1 draw.


A large number of specters witnessed the thrilling encounter between Gilgit-Baltistan and FATA. Abid and Imtiaz were goal scorers for the Gilgit-Baltistan while Samiullah and Khushal netted 1 each for FATA.


The second match was played between Police and Port Qasim where Imran Azhar and Arshad Ali were goal scorers for Police while Wasif Raza scored the lone goal for Port Qasim.


The third match was played between SNGPL and HEC where SNGPL thrashed HEC in a one-sided encounter by 5-2. Rana Waheed scores a brace while Zahidullah, Dawood and Muhammad Asad netted the ball once for SNGPL. Mohammad Boota and Asher Tariq scored the goals for HEC.


The match between Army and Customs ended in a draw as none of the teams could manage to score twice. Abdul Jabbar netted for Army, while Salman Hussain scored for Customs.


Teams participating in the event are:
Departmental Teams