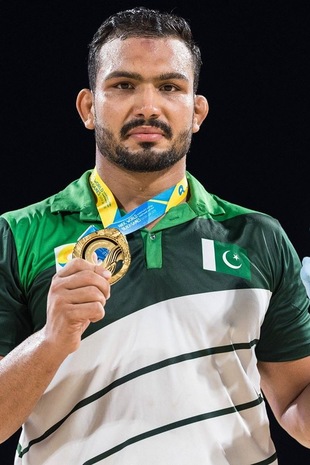 2010
Inam participated in the 84 KG  weight class freestyle at the 2010 Commonwealth Games in New Delhi, India, where he won the gold for the country by overpowering the opponent wrestler from the arch-rival nation, India.
2014
Inam was selected to participate in the 2014 Commonwealth Games in Glasgow, UK as well as at the 2014 Asian Beach Games in Phuket, Thailand where he won Bronze in the 90+ KG weight class in beach style.
2016
Inam participated in the 86 KG class freestyle at the 12th South Asian Games in Guwahati, India, where he once again won the Gold in freestyle wrestling against his Indian opponent.
He then competed in the - 90 KG weight class of the 5th Beach Asian Games in Danang, Vietnam, where he clinched another gold medal in freestyle wrestling.
Inam also participated in the 86 KG weight category of the 2016 Common Wealth Wrestling Championship in Singapore, where he earned a Silver medal in freestyle wrestling.
2018
Inam bagged the gold medal in 86 KG weight category at the 2018 Commonwealth Games, Gold Coast as well.
2019
He has received pride of performance award on 23 March 2019.
Pakistan’s champion Wrestler Inam Butt added another feather to his cap when he won the Gold medal in the World Beach Games in Doha, Qatar.
2020
Pakistan Cricket Board(PCB) invited Inam Butt to HBL PSL match and presented a token of appreciation with their Hamarey Heroes Campaign.
Edit this Profile


Muhammad Inam Butt is a renowned wrestler from Pakistan who hails from Gujranwala city. Inam has represented Pakistan at several international platforms where he has been keeping straight his top spot triumphs in almost all of the participating events at both national and international tournaments and championships.

He is currently acting as the ambassador for Pakistan Olympic Association (POA).

National hero Inam Butt tie the knot on January 9 2020, in Gujranwala also known as the city of wrestlers.