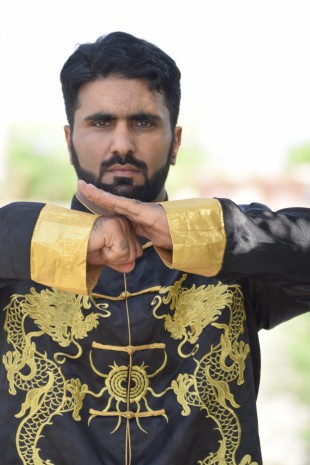 
Irfan Mehsood is one of the top martial artists in the country having 30 records mentioned in the Guinness Book of World Records.

Irfan belongs to the South Waziristan Tribal District. He lives in Dera Ismail Khan. He is the first person to introduce Wushu, MMA, boxing in his area. He is also national, KP and FATA level gold medalist in wushu and Shaolin wushu kungfu.

He has been pursuing his passion for martial arts since his teenage years and began training in 2005 “right after his matriculation”.

But he turned his passion into a purpose after his family was internally displaced due to the Waziristan operation in 2009. He moved to DI Khan with his family among others.

Irfan has done his M.Phil from Gomal University and the martial artist. Now, Irfan is a coach at Lions Den MMA fight club.

Irfan Mehsood got inspired by Jackie Chan, who is known in the cinematic world for his acrobatic fighting style, comic timing, use of improvised weapons, and innovative stunts, which he typically performs himself.