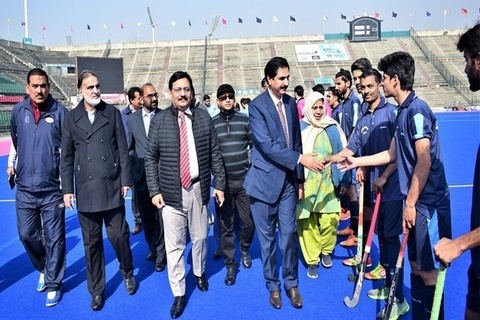 Hockey competitions continued on the third day of the first Quaid-e-Azam Inter-Division Hockey Championship 2021 under the auspices of Sports Board Punjab (SBP) in collaboration with Pakistan Hockey Federation and Punjab Hockey Association.

According to the details, Multan began the third day’s proceedings with an overwhelming 4-1 victory against Rawalpindi.

In the second match, Faisalabad defeated Gujranwala by 2-0.

Shahbaz Ahmed of Faisalabad netted the goals in the 32nd and 56th minutes of the match through impressive field moves. Faisalabad and Gujranwala got nine and three penalty corners, respectively.

In the third encounter of the day, Sahiwal bounced back from a 2-goal deficit and carved out a 4-3 victory against DG Khan.

Sahiwal strikers struck four goals on the trot: in 36th, 42nd, 47th and 51st after conceding two goals in the first 33 minutes.

Sargodha stunned Lahore by 4-3 in the last match of the day. Lahore took the lead in the 12th minute, but Sargodha leveled the score in the 20th minute. Sargodha added two goals in 38 and 43rd minutes to strengthen their position.

Lahore bounced back and squared the score with two goals in 46th and 49th minutes. However, Sargodha netted the match-winning goal in the 54th minute through a penalty corner.