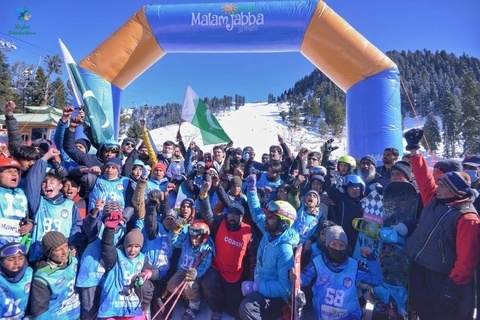 Over 44 national and international players, including eight women players and enthusiasts of snowboarding games from European countries, Belgium, France Afghanistan and Pakistan participated in the event.

Pakistan’s Fatima Nadeem, Sara Nadeem and Ayesha Akmal clinched first, second and third positions, respectively, in the women’s giant slalom competitions. A total of eight women participated in the last in the event. Of them, three were from Afghanistan.

In the women’s parallel giant slalom competitions, Pakistan’s Sara Nadeem won Gold medal, Fatima Nadeem Silver medal while Ayesha Akmal grabbed Bronze medal. The foreign and local tourists and visitors, who had thronged the serene resort, enjoyed the games and music on the white snow during the three-day gala in Malam Jabba.

The Khyber Pakhtunkhwa Culture and Tourism Authority (KP-CTA) under the auspices of Tourism, Sports, Archaeology, Culture, Museums and Youth Affairs Department and the Samson Group of Companies had jointly organized the spectacular event.

Pakistan Tehreek-e-Insaf Senator Faisal Javed was the chief guest at the concluding ceremony, who gave away prizes and trophies to the winners. Officials of the Tourism Department and the Samson Group of Companies were also present on the occasion.